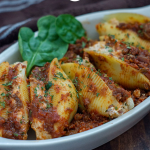 For as long as I can remember, my family has been making stuffed shells. We’ve only ever made them one way. Imagine my shock when I learned that there are other recipes! (See my recipe for Spinach Artichoke Stuffed Shells here.) From what I gather, our recipe is the “classic” way of preparing stuffed shells.

When I was little, I would scoff at the spinach in the shells, but ate most of it anyway. The only time I pulled it out was if the piece was really long. Or it wasn’t mixed in with the cheese. Yes, I was a picky eater. As I’ve gotten older, I am much better about trying new things.

Stuffed shells were always my cousin’s favorite, too. I remember any time I was with them for his birthday we would always have stuffed shells. It was also a common food during our annual family reunion beach week vacation. My mom would prep them the day before we left for the beach and keep them refrigerated. Then, the first night, she wouldn’t have to worry too much about dinner. Just pop the shells in the oven and let them bake while we got settled into our condo.

I have always been a fan of cheese. I love cheese. Especially mozzarella cheese. And add some red sauce and I am in heaven! My best friend and I used to buy mozzarella stick cheese and a bottle of marinara sauce and just have a snack of cheese dipped in sauce.

So, naturally, stuffed shells are one of my favorite meals, too. I always thought they were hard to make, but they aren’t too bad. Although, my hands always get messy. And, if I want to talk to my grandma, I just need to make a batch of stuffed shells… Almost every single time I am in the middle of stuffing them (with dirty hands) she calls me!

Boil the shells according to the package directions. I have found that the Barilla brand works the best. The off-brand tends to tear which doesn’t work well for stuffing.

Also, cook the spinach according to the directions. I have used both frozen and fresh spinach, both work well. If you use fresh spinach, wilt it in a pan with a bit of oil.

In a large mixing bowl, combine the ricotta cheese, mozzarella cheese, pepper, and cooked spinach. Add about 1/4 cup of the spaghetti sauce and stir to combine.

Preheat the oven to 350F. Add a small layer of sauce to the bottom of a 9×13 baking dish so the shells don’t stick when they bake.

Once the shells are cool enough to handle, stuff a spoonful of mixture into the shells. Continue until you run out of shells or filling, placing them in a single layer in your baking dish.

If you have to do a second layer, spread some sauce between the layers.

Cover the shells with the remaining sauce then cover the pan with foil or an oven-safe lid.

Bake for 30-40 minutes, then let cool for about 5 minutes before serving warm. 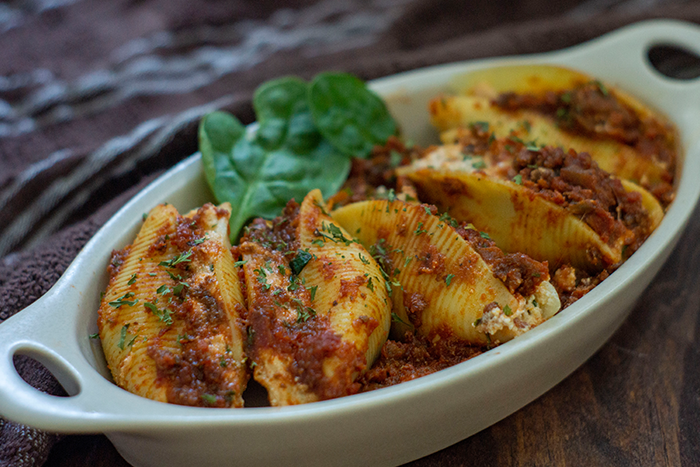