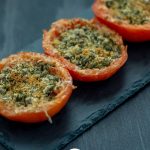 Combine cheese, herbs, and breadcrumbs to make a delicious filling for stuffed tomatoes. Perfect as an appetizer or a side dish.

The last few times we have done our local produce co-op, it’s been full of tomatoes. So many tomatoes. There are only so many fresh tomatoes that our family can eat in one week. When we realized we had more than we would eat, Justin asked if we could try to make stuffed tomatoes. I found this recipe for tomatoes stuffed with capers and . I like capers. and breadcrumbs, plus the seasonings, so we decided to give it a try. That’s how we ended up with Cheesy Caper-Stuffed Tomatoes.

As usual, we made some changes to the base recipe. Mainly, I needed some cheese. Of course, by adding the cheese, the recipe is no longer vegan or dairy-free if you need that. Luckily, at our house, we don’t have any major allergies or dietary restrictions.

When I looked through the recipe, I decided that it either needed mozzarella cheese or parmesan cheese. Mozzarella would probably go well with the tomatoes and sherry part of the recipe while parmesan matches with the breadcrumbs and capers.

After much debate, I went with mozzarella cheese. It’s one of my favorite cheeses. And it happened to be the only one we had in the refrigerator at the time! And it also pairs well with the salty flavor of the capers.

Start by heating the oven to 500F then slice the tomatoes in half. Use a spoon or your hand to pull out the seeds.

Pour the cooking sherry into the bottom of an 8×8 baking dish and lay the tomatoes in there with the cut sides facing up. Sprinkle them with a bit of salt.

In a small mixing bowl combine the parsley, capers, oregano, garlic, and half of the breadcrumbs.

Put a pinch of mozzarella cheese in each tomato, then top that with the caper mixture.

Sprinkle the rest of the breadcrumbs on the tomatoes and drizzle the olive oil.

Bake the tomatoes for about 10-15 minutes, until they start to soften and the breadcrumbs are golden brown. 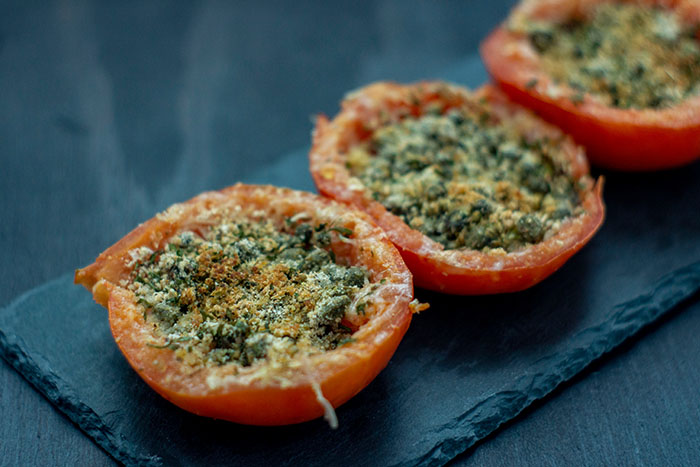