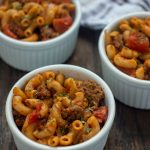 Goulash, eaten at the Yule Ball, has many varieties. This recipe is hearty comfort-food at it’s best made in only one pot for easy cleanup.

Goulash is one of the foods that is mentioned briefly in Harry Potter but never described further. During the Yule Ball, Professor Dumbledore orders pork chops by talking to his plate. The only other item that we know must have been on the menu that night was goulash. A few paragraphs later, Harry is laughing into his plate at a comment Dumbledore makes to Professor Karkaroff.

Harry snorted into his plate of goulash.

Goulash is one of those dishes that can be made in a variety of ways, depending on where you are from and what style you are cooking. Being in the United States, I made an American version of the dish. I’m sure it’s a bit different than what Harry would have eaten at the Yule Ball.

Goulash originated in Hungary and was more of soup than a stew. Almost everywhere else you go in Europe, goulash is a rich stew with hearty meat in it. Either way, goulash always has paprika in it. Of course, being American and the way things tend to work here, our goulash doesn’t use paprika, and we use cheap meat (ground beef) instead of the steak that most Europeans use.

Goulash in the United States is a comfort food that originated in the midwest and the south using simple ingredients thrown together in one pot. Every American goulash recipe I’ve seen has elbow macaroni in it, which is a massive deviation from the Hungarian original.

Whether you agree with changing so much from the original or not, this Americanized version is absolutely delicious! You can make it in one pot, and the leftovers reheat for lunch with no problem!

To make American goulash, brown the ground beef in a large stockpot or Dutch oven over medium heat. Make sure it’s cooked all the way through and no longer pink. If you used meat with high fat content, you might need to drain the meat. I always buy the leanest meat possible, so there was so little fat I didn’t worry about draining it.

Add the onion and garlic to the meat and cook for about 3-5 minutes, until they are soft and the garlic is fragrant.

Throw in the diced tomatoes, tomato sauce, water, Worcestershire sauce, Italian seasoning, seasoned salt, and uncooked macaroni noodles. Mix everything together and bring it to a boil.

Reduce the heat to medium-low. Let the stew simmer, covered, for about 25-30 minutes, until the pasta is cooked and soft. Remove the stew from the heat and serve immediately! You could also add a dollop of sour cream or a bit of mozzarella cheese to the top if you want. 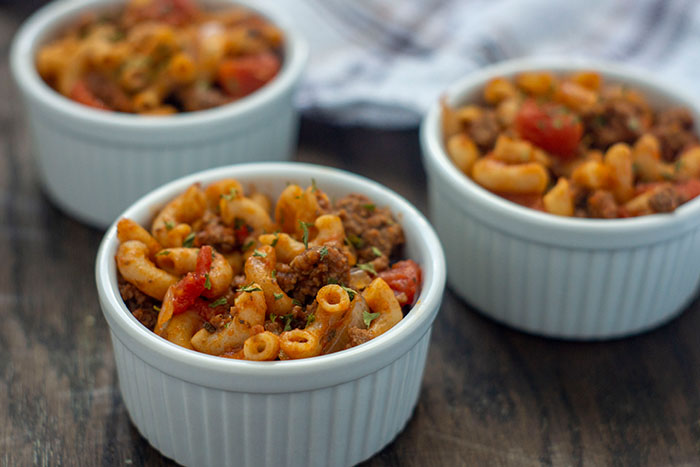