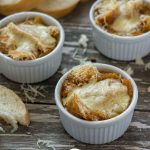 Kreacher’s cooking vastly improves once Harry is nice to him, and this easy, delicious French Onion Soup is a testament to his good cooking.

In Harry Potter and the Deathly Hallows, Harry gives Kreacher the locket that belonged to Sirius’s brother, Regulus Black. Kreacher becomes much more amicable towards the trio and his cooking skills vastly improve. He makes them meals such as breakfast rolls and coffee, a promise of steak-and-kidney pie (which never gets eaten), stews, treacle tarts, and French Onion Soup.

When I was looking for food to make for my Harry Potter Club, there was no way I was making a steak-and-kidney pie. That just sounds horrible. And we meet in the evening, so I didn’t want to do breakfast. But French Onion Soup sounded like a great recipe to work on.

Kreacher came bustling to the table with a large tureen in his hands, and ladled out soup into pristine bowls, whistling between his teeth as he did so.
…
He [Harry] began to spoon soup into his mouth. The quality of Kreacher’s cooking had improved dramatically ever since he had been given Regulus’s locket: Today’s French onion was as good as Harry had ever tasted.

-Harry Potter and the Deathly Hallows

Would you believe, before making this recipe, I’d never had French Onion Soup before? Justin gets it almost every time we go to Panera, but I never have. I don’t know why it just never sounded appetizing. But Justin was anxious to try this, so we gave it a shot.

I was worried about the soup having too much onion flavor. I like onions, but I don’t want it to be an overwhelming flavor. Luckily, the way we made this soup, all of the flavors balanced and I didn’t taste one thing over another.

Surprisingly, the soup was easy to make. It always looks like a fancy soup. I would have thought it was more complicated. The only reason it takes an hour is that it has to simmer for 30 minutes.

Start by melting the butter and olive oil in a large stockpot over medium heat.

Add the onions and stir continuously until they are soft and translucent in appearance. This will probably take about 5 minutes.

Pour in the beef broth, cooking sherry (Professor Trelawney would be proud!), thyme, salt, and pepper. Let this simmer, uncovered, for 30 minutes.

Set the oven broiler to low and ladle the soup into one-safe serving bowls.

Top it with either a full slice of bread or chunks of bread, whichever you prefer. Sprinkle with mozzarella and parmesan cheese. We made this with homemade white bread from the bread machine.

Place your serving dishes on a baking sheet. Broil for about 3-5 minutes, until the cheese is bubbly and starts to brown. 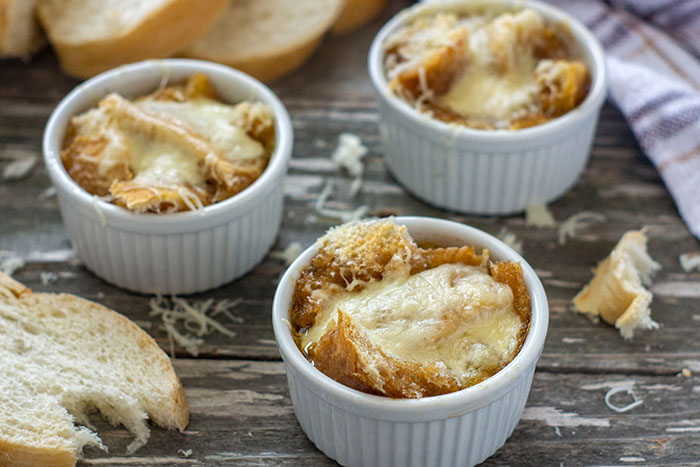