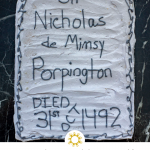 There’s nothing like a tombstone cake to celebrate the day you died, right? Make Nearly-Headless Nick’s Deathday cake for your next HP party!

I’ve been to many birthday parties in my life, but never a deathday party! If you’ve only watched the movies, then you missed this reference. In Chamber of Secrets, Nearly-Headless Nick has a party on Halloween night to commemorate the day he was killed. It was leaving this party that Harry first heard the Basilisk (not leaving detention with Lockhart as in the movie).

Harry, Ron, and Hermione were the only living people at the party. The rest were all of the Hogwarts ghosts and others that Nick knew.

The smell was quite disgusting. Large, rotten fish were laid on handsome silver platters; cakes, burned charcoal-black, were heaped on salvers; there was a great maggoty haggis, a slab of cheese covered in furry green mold and, in pride of place, an enormous gray cake in the shape of a tombstone, with tar-like icing forming the words,

Since ghosts can’t eat, everything at the party was completely rotten. When asked, one ghost tells them that when he walks through the table of food he can almost taste it because it’s so strong from being rancid.

Of course, I wasn’t going to make any rotten, nasty food. But the cake was something I could do. I had a hard time with this cake, and it’s not my best work. I like to think the house-elves were probably too busy making the Halloween feast and just threw this together for Nick, which is why the writing doesn’t look great. The truth is, I am horrible at writing with icing.

This cake was almost a fail. I was very close to giving up this night and trying again another time. I started trying to make a homemade angel food cake but didn’t have enough eggs for the 2 1/2 cups of egg whites it called for. After I had already mixed the flour and sugar together for the recipe. I wasn’t able to separate those. So I tried to find a recipe that used egg yolks, but most of those wanted the butter and sugar creamed. I didn’t want to waste the flour and sugar I already used, so I did what I do best: I just “winged it” and made my own cake!

It’s not quite the same as Harry Potter’s Birthday Cake. But, I wouldn’t expect a Deathday Cake to be as exciting as a Birthday anyways.

Preheat the oven to 350F. In a large bowl, sift together the flour, sugar, salt, and baking powder. Set that aside.

Using an electric mixer or stand mixer, beat the butter and egg yolks until they are combined. Then mix in some vanilla extract.

Add half of the flour mixture into the butter mixture. Stir until combined.

Pour in the milk and stir, then add the rest of the flour mixture and stir until it forms a creamy batter. Butter and flour a 9×13 metal baking pan. Spread the batter into the prepared pan and bake for about 35-40 minutes, until a toothpick comes out clean.

While the cake is cooling, make the frosting by combining the cream cheese and butter. Stir in the powdered sugar, a little at a time, and the vanilla extract. Mix until it’s creamy. Separate the frosting into two bowls, with about 1/3 in one bowl and 2/3 in the other. In the first bowl, add a few drops of purple (or black) food coloring. In the small bowl, add a very tiny amount of either purple or black to give the frosting a gray tint.

Once the cake has cooled, invert it onto a work surface and round two of the corners to make it into a tombstone shape.

Spread the light gray frosting on the entire cake.

Use an icing piper to write the words on the cake. Serve within the hour, otherwise, the cake needs to be refrigerated because of the cream cheese frosting. 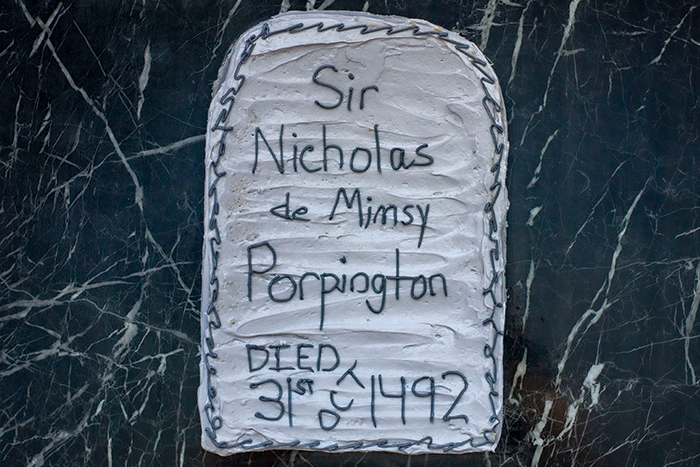