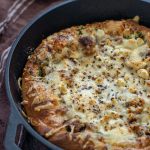 Try a healthier take on pizza with this delicious and hearty sausage pizza that uses a kale pesto sauce topped with onions and cheese.

Pizza has always been one of my favorites foods. I can’t tell you how much pizza I ate while I was pregnant with my boys. But when Justin found this recipe for a sausage and kale pesto pizza from the Southern Living magazine he wanted to try, I was hesitant. I like my pizza with red sauce, a whole lot of cheese, and nothing else.

We weren’t sure we would be able to make the recipe at first. It requires a skillet that can be cooked in the oven, and I don’t have any cast iron skillets yet. I looked up the non-stick pans that I have. They are oven safe up to 450F. The original recipe says to cook at 500F but since the pans can’t go that high we did 450F and it worked out fine. Now that I have cast-iron skillets, I have no problem with meals like this.

A few weeks ago I told a story about Justin getting some fresh home-made sausage from a friend. There was still a bit of it left, so we used that up in this recipe. We had also bought some kale for another recipe so we had a bunch of extras.

The original recipe says to purchase a pre-made pizza dough, but I used our homemade pizza recipe to make my own dough. By substituting whole-wheat flour for the all-purpose flour I was able to make a whole-wheat crust as suggested.

When the dough is ready, preheat the oven to 450F. Brown the sausage in a large skillet. This one won’t go in the oven, so you can use any skillet. Crumble the sausage and cook until it is no longer pink in the middle. Then remove from the skillet and place on a plate lined with towels.

Don’t wipe the pan out, and add two tablespoons of oil with the sliced onions. Sprinkle with a bit of salt, and cook over medium heat, stirring frequently, until they are brown and softened. This usually takes about 10 minutes, then remove from the heat.

In a food processor, combine the kale, basil, parmesan cheese, garlic, two tablespoons of oil, and 1/4 teaspoon of salt. Process this until it is smooth and makes a pesto.

Heat an oven-safe skillet over medium heat. Add one tablespoon of oil and swirl to coat the pan. Then sprinkle with the cornmeal so that it coats the pan as well. The cornmeal gives the crust a slightly sweet flavor that went really well with this meal.

Stretch the dough out so that it covers the pan, including the sides, to create a deep-dish crust for the pizza. Increase the heat to medium-high and cook the crust for about 2-3 minutes, until it starts to bubble up.

Quickly spread the kale pesto over the crust then top with the sausage and onions.

Cover with cheese. The original recipe called for feta cheese, but I don’t like feta, so I used only the mozzarella. Sprinkle some crushed red pepper over the pizza, and brush the exposed edges of the crust with more olive oil.

Place the entire skillet in the oven and bake for about 12-15 minutes until the crust is golden brown and the cheese has melted. 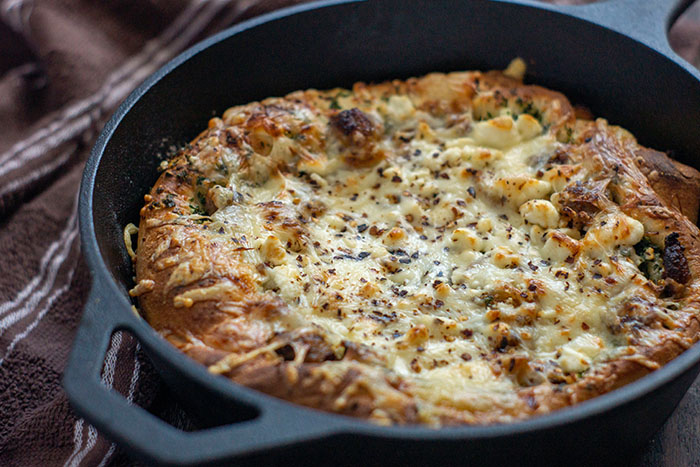