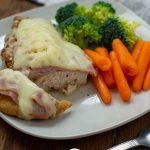 The chicken, the ham, the melted cheese…. yummy!

For the longest time, Chicken Cordon Bleu was something I would only get if we were eating out somewhere. I didn’t want to deal with cooking it myself.

One day, I decided I could probably make this myself. I started the recipe like my Feta-Topped Chicken since they are similar recipes. But I added the ham and mozzarella instead of feta and tomato.

Chicken Cordon Bleu was originally a Swiss recipe called schnitzel. It has since evolved over time. Of course, the traditional cheese is, therefore, Swiss Cheese, but I don’t like it. So, we used the next best soft cheese that we all agree on: mozzarella cheese.

This recipe is a quick and easy way to make chicken cordon bleu. Seriously, easy. It takes about 25 minutes to make and not much of that is active cooking.

You may call this cheating, I call it efficient cooking!

In a large skillet, over medium heat, combine the chicken broth, balsamic vinaigrette, and pepper.

Lay the chicken breasts in the liquid. Cook for about 15-20 minutes. Make sure to flip a few times while it cooks. The chicken needs to be fully cooked.

Reduce the heat to low and layer the ham and cheese on top of the chicken.

Cover the pan and let it heat on low for about 3-5 minutes until the cheese has melted. 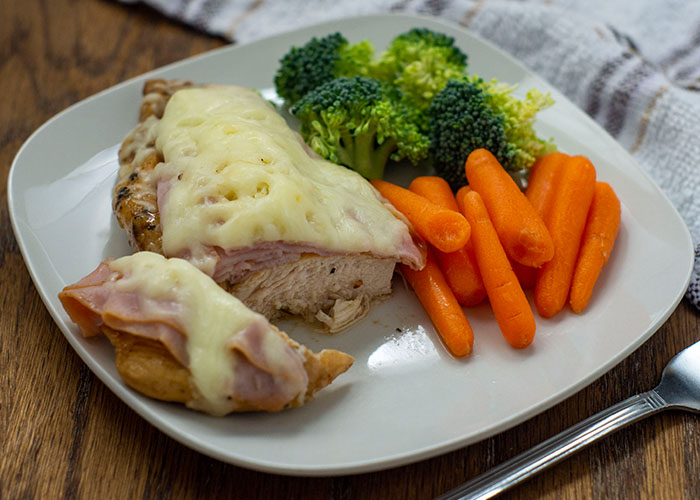