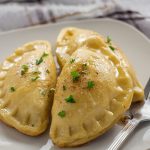 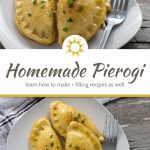 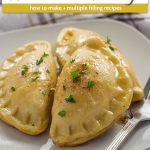 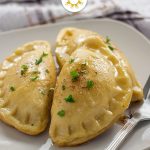 Pierogi are a delicious combination of dough and filling, and although they can be bought premade, making them yourself tastes much better.

I can’t believe that I had never had a pierogi until I met Justin. In fact, I had never even heard of them before we went shopping together for the first time and he wanted to buy some. Later that night he made some for dinner and I realized what I had been missing out on for so many years! Pierogi are small pockets of dough filled with either a sweet or savory filling.

Typical fillings include potato, sauerkraut, ground meat, cheese, and fruits. The dumplings may be served with a topping, such as melted butter, sour cream, or fried onion, or combinations of those ingredients.

I always prefer the ones filled with potato, Justin enjoys the sauerkraut ones but those are hard to find at the store. And we both eat them with some melted butter on top of them. I like to boil mine, Justin prefers to pan-fry his. In other words, there are so many ways you can make and enjoy pierogi.

Justin’s mom talks about how they used to eat them growing up, but her mom would make them herself. So I talked to Grandma Holmes one day and got the recipe from her and made our own pierogi. I can tell you, it was not a quick recipe, but it makes so many that we freeze them and enjoy them for weeks to come. I often double the recipe so we have plenty.

Start by preparing the dough. In a large bowl whisk together flour and salt.

In a smaller bowl or measuring cup combine two eggs in one cup of water.

Slowly mix the eggs and water into the dough until it is combined. You may not need all of the egg/water mixture for the dough.

Dump the dough out onto a floured counter and cover with more flour.

Cover the dough with a dish towel or plastic wrap and let it rest for about 10-15 minutes.

One batch of dough is enough for ONE of the two fillings I list. If you want both potato and sauerkraut pierogi, you need to make two batches of dough.

Prepare the mashed potatoes according to the package directions.

Stir the ricotta cheese, butter, and cheddar cheese into the potatoes.

Rinse the sauerkraut and drain as much water as possible. Heat the butter and oil in a medium saucepan and add the diced onions.

Add the sauerkraut, salt, and pepper to the pan and cook until heated through.

Remove the pan from the heat and add the sour cream, mixing well. Cover and refrigerate until it’s cool enough to work with.

Cut the dough in half, it’s easier to work with a smaller amount. Make sure to keep the portion of dough you aren’t using covered with the towel or plastic wrap. Use a rolling pin to roll the dough out to about 1/8″ thickness. The first time I made these it was too thick and we tasted more dough than filling.

Use a biscuit dough cutter or a dough press to cut circles in the dough. The first time I made these I had circular biscuit cutters, and they worked, but it took a lot more effort. Justin’s grandma bought me pierogi makers (also called a dough press) and they really helped to speed up the process!

Scoop about a tablespoon of your filling, depending on the size of the pierogi you make, and place it in the center of the dough.

Close the dough up by folding in half (like you would a calzone) and seal the edges.

If you don’t have a pierogi press, you can fill these by putting the circles in the palm of your hand, fill them, then use your hands to close it up and seal with a fork. Continue doing this until you have used all of your dough and filling.

To cook the pierogi, you can either boil them like you would pasta, cooking until they float, or fry them in a pan until they are brown on either side.

To freeze any uncooked pierogi, line a pan with parchment paper, and lay the pierogi in a single layer. Then you can put another sheet of parchment paper on to make layers. You just don’t want the pierogi touching each other so they don’t stick. Once they are completely frozen, move them to a ziplock bag. They can be frozen for a few months and don’t need to be thawed when you want to cook them. 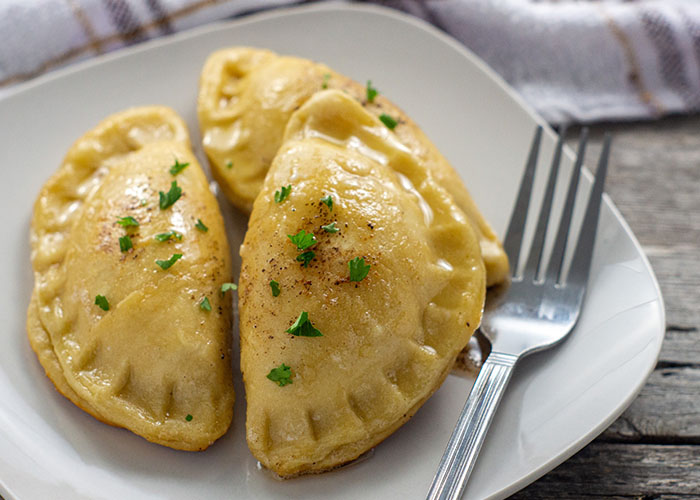