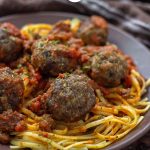 Spaghetti and Meatballs is a classic. Make your own meatballs for even more flavor while still having dinner on the table in 30 minutes.

Spaghetti and meatballs is such a simple, classic recipe but it often gets overlooked or forgotten. At least, I know it does in my house. We are always trying to find new foods for dinner, that we don’t think about the easy meals.

You could open my pantry on almost any given day and find some pasta noodles in there. Maybe not specifically spaghetti, but possibly fettuccine or linguine. Either way, pasta is almost always an option at my house.

We don’t always have the ingredients to make homemade meatballs, though, so that is a treat when we do it. The boys both ate the meatballs when I told them they were similar to a hamburger rolled into a ball. Kids tend to like silly things like that.

When I first met Justin’s parents, they were in Florida to help him and his brother move into a new condo. Because of moving and all the work that comes with it, his mom was looking for an easy meal. So, she made some spaghetti and meatballs. But not just frozen meatballs, these were homemade!

Before then, I had only ever had frozen meatballs. Even that was rare because we didn’t have meat with our spaghetti growing up. My mom won’t eat anything that comes from a cow. So, this was quite a treat!

While she made them, she also told me her recipe which I wrote down to save for later. You can eat the meatballs fresh, or freeze for later. If you want to freeze them, cook all the way, then freeze individually. Once they are frozen, you can put them in one container. Then, to reheat, either bake again or heat in your spaghetti sauce.

Preheat the oven to 400F. In a large mixing bowl, combine the ground beef, bread crumbs, milk, salt and pepper, onion, and egg. Mix everything together. I find using your hands works best to make sure it is all well incorporated.

Using your hands, grab a small amount of the meat mixture and form into a ball about the size of a golf ball. Place this on a baking sheet and continue with the rest of the meat.

Bake uncovered for about 20-25 minutes until they are cooked through in the middle. Meanwhile, cook the spaghetti noodles according to package and heat the pasta sauce in a small saucepan if you want it warm.

Serve the spaghetti noodles covered with sauce and top with a couple of meatballs. Garnish with shredded parmesan cheese if desired. A side of Cheesy Garlic Bread goes well with spaghetti and meatballs. 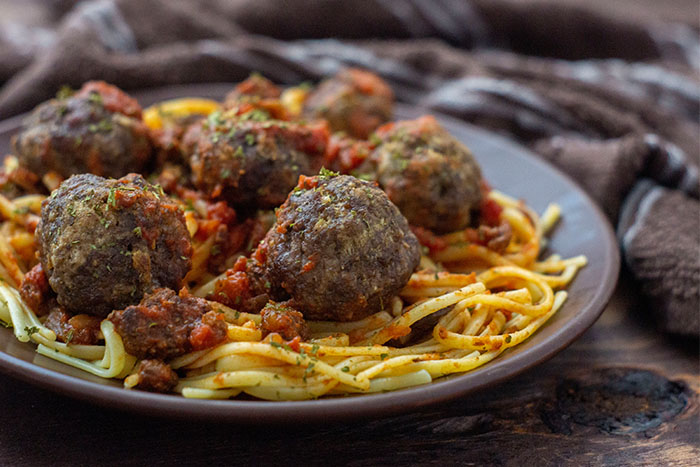 Spaghetti and Meatballs is a classic. Make your own meatballs for even more flavor while still having dinner on the table in 30 minutes.
Prep Time 10 minutes
Cook Time 20 minutes
Total Time 30 minutes
Course:
Side Dish
Cuisine:
American
Keyword:
ground beef
|
meat
|
pasta
Servings: 4
5 from 7 votes

26 thoughts on “Spaghetti with Homemade Meatballs”