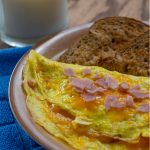 Nothing says classic omelet like a ham and cheese omelet. Make it as a protein-packed breakfast, or breakfast-for-dinner in 15 minutes.

There are so many ways to make an omelet. Some of them get really fancy with a lot of ingredients (such as a Greek Omelet), but I prefer a plain and simple Ham and Cheese Omelet. Bonus: I can usually get Ryan to eat this since he likes eggs and ham. Tyler doesn’t eat a lot of eggs, so he doesn’t care much for an omelet.

You can use almost any kind of ham, but we often have ham sliced from the deli. I like either honey ham or off-the-bone ham for these. The flavors aren’t overpowering, so it works well in the omelet. And, for me, the sharper the cheddar cheese the better!

We make omelets for breakfast and for breakfast-for-dinner, depending on what we are in the mood for at the time. Since the omelet is packed with protein, it makes a great breakfast to keep you full for a good portion of the day.

Cut the ham into small pieces and shred the cheese if it isn’t already.

In a small mixing bowl, whisk the eggs, milk, salt, and pepper together.

Heat a small pan over medium heat. Pour the egg mixture into the pan, making sure the egg spreads out to fill the pan.

Cook for about 5 minutes, until the egg is cooked on the bottom. Carefully flip the eggs, and place the ham and cheese on one half of the egg.

Let the eggs cook for another 3-5 minutes, until done on the bottom. Fold the half without fillings over on top and let it cook another minute or two to warm everything together.

Place a few pieces of the ham and cheese on the outside as a garnish. This is also a great way to tell the omelets apart if you are making a few with different ingredients in them.

Serve immediately while the eggs are still warm. 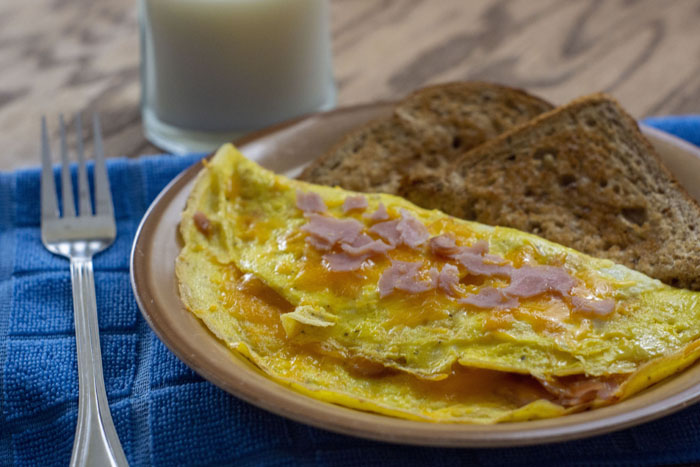 28 thoughts on “Ham and Cheese Omelet”