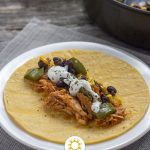 Combine the delicious flavors of Texas bbq with southwestern cuisine to get a perfect meal that the whole family is sure to love!

Quick and easy BBQ Chicken and Black Bean Tacos are an excellent option for a healthy meal that the whole family will enjoy. I thought the combination sounded a bit odd at first, but we decided to give it a chance, and it was delicious!

Not to mention, this just screams Texas to me! The mix of Southwestern foods with Mexican influence and Texas bbq makes me think that this is the perfect Cinco de Mayo recipe in the Lone Star state.

The recipe calls for a rotisserie chicken, which would help keep the cooking time to 30 minutes. We didn’t have any since we went to the grocery store so early in the morning that the deli didn’t have them out yet. I subbed in some boneless skinless chicken breast and cooked that which worked out well.

I have never been a big fan of black beans. That was my main reason for being hesitant to try this recipe. But they are mixed with so many other flavors that they don’t stand out. In my opinion, the beans added a little bit of nutrition and texture to the dish, and that was about it.

In addition to the taste, these tacos look so pretty! And because of the nature of tacos, you can prepare all of the ingredients, and each person can fill them to their liking, making this a great recipe for those with picky eaters in the house. Even with ingredients I don’t always care for, bbq chicken and black bean tacos are always a welcomed meal here.

In a medium skillet satué the chicken breast with oil. Season with salt, pepper, and cilantro. Flip as needed until the chicken is cooked through. Shred the chicken and set aside.

After removing the chicken from the pan, add the diced bell pepper. Cook for about 5-6 minutes. The pepper should start to soften slightly.

Stir in the corn and black beans. Cook for another 2-3 minutes until they are warmed through, especially if you are using frozen corn. Remove the pan from the heat.

In a medium bowl, mix the shredded chicken with the bbq sauce.

Warm the tortillas according to the package directions. Trust me, you want to warm them, we didn’t with the first ones we made, and as soon as we tried to roll the tacos slightly to pick them up they started to crack down the seams and made a huge mess!

Whisk the sauce ingredients in a small bowl until combined.

Top each tortilla with a scoop or two of the chicken and top with the veggie mixture. Then add a dollop of the sauce and garnish with cilantro. 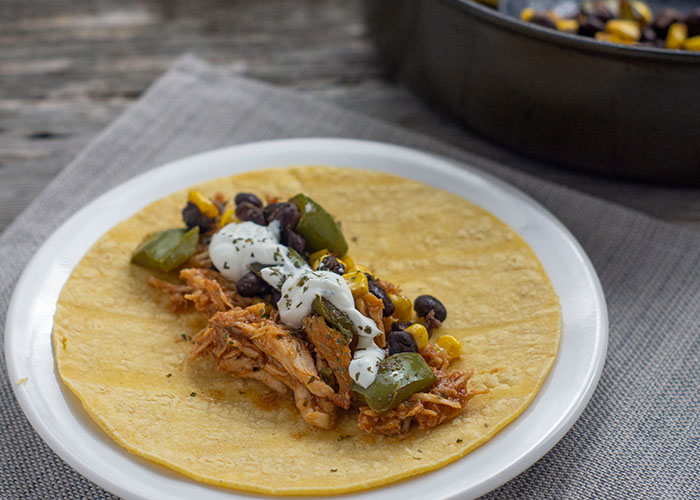