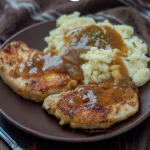 Pan-Fried Pork with Brown Gravy is a quick and easy meal made with flour and seasonings over pork chops smothered with brown gravy sauce.

Uncooked pork chops seem like such an odd thing to have leftover. But a few weeks ago we found ourselves with a few chops in the refrigerator. When my mom was in town, we made Ranch Pork and Potatoes for her. The pork chops were on sale in a larger quantity than we needed, but we couldn’t pass up the deal. We made a quick meal of Pan-Fried Pork with homemade brown gravy with the extras.

After taking my mom back to the airport, Justin and I were trying to decide what to make for dinner. And how we could use the extra pork chops. The boys were staying the night at his parent’s house, so we needed something for just the two of us. Since we had a kid-free night, we also wanted something quick and easy. Justin was the one who decided that pan-fried pork chops sounded like a good, easy meal for the evening. I said we needed something more than just pan-fried pork because that would be too boring.

Mashed potatoes are one of my favorite foods. I prefer to make them homemade, but also keep some instant in the pantry for times like this. So we knew we were having pork and mashed potatoes. But, we were still missing something. Gravy, we needed gravy for it all.

Justin found this recipe for a homemade brown gravy using all ingredients that we had on hand. I used that as a base to make my own homemade gravy.

In a large skillet, melt the butter over medium heat. In a small mixing bowl, whisk together the flour, garlic powder, paprika, salt, and pepper.

Dredge each pork chop in the flour mixture until they are completely covered. Place the pork chops in the melted butter.

Fry for about 5 minutes on each side, until they are golden brown and cooked through. 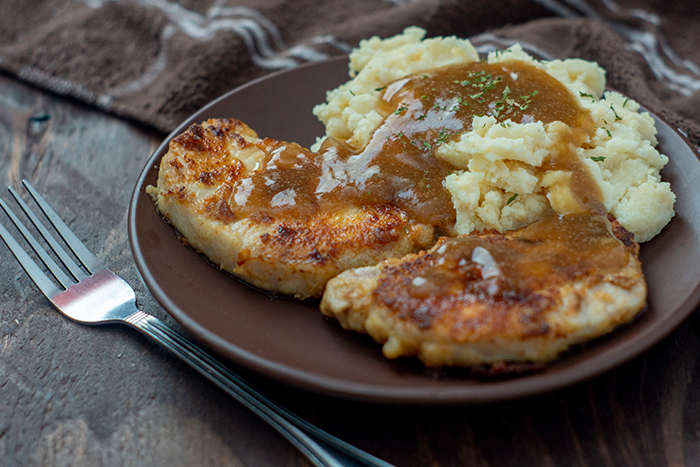