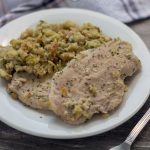 I think most people have heard of stuffed pork chops before, but I like to make mine un-stuffed! The taste is similar to a stuffed pork chop, and this is much quicker and easier. You know I am all about the quick and easy recipes most nights.

Growing up, my dad made this meal often. My mom doesn’t eat anything from a cow, so we ate a lot of chicken and pork. When I moved away to go to UCF for college, I would call my dad probably once per month to ask how to make these. There was always one step I couldn’t remember. Finally, when I started actually gathering my own recipes and having them organized, I wrote this one down.

To make things quick and easy, I usually use a box of stuffing mix. But, on days I have more time in the kitchen, I make homemade stuffing to go with this recipe. The trick is making sure the stuffing doesn’t get dried out while everything is baking.

In my opinion, a true meal of stuffed pork chops is difficult to eat. Usually, the pork has a slit cut into it and the stuffing is inside the meat. The few times I’ve had it this way, the stuffing all comes out as soon as I try to cut it or take a bite. Also, there tends to be a lot less stuffing to pork chop ratio this way.

The way I make my un-stuffed pork chops, there is a lot of stuffing with the pork. Because of this, the extra stuffing makes a great side to the pork.

When you buy the pork, you’ll want to get thinly sliced pork chops. If it’s too thick, everything has to cook so long that the stuffing may dry out. Also, note that when you are preparing the stuffing, this recipe calls for more water than the box.

Preheat the oven to 350F. In a medium saucepan bring the water and butter to a boil.

Remove from the heat and add the stuffing mix, stirring until moist.

Put a small layer of the stuffing in the bottom of a baking dish. The size you use will depend on how much pork you have to cook. I usually use a 9×13 so there’s only one layer. Place the pork chops on top of the stuffing.

Add the rest of the stuffing as evenly as possible. 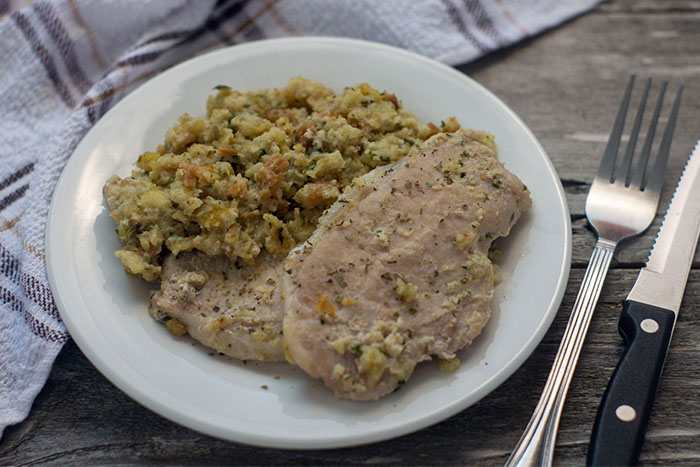