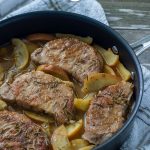 Cooked apples with sage and other seasonings are perfect toppings for pan-fried pork chops, just like Dumbledore had at the Yule Ball.

Throughout the Harry Potter books, there are some foods that are mentioned in one line. One such recipe is the pork chops that Albus Dumbledore orders for his meal at the Yule Ball in Goblet of Fire. It’s fun to work with some unexplained recipes. It gives me more of a chance to try out my own take on the food.

If you have only watched the movies, then this reference is completely skipped over. #thebooksarealwaysbetter During the Yule Ball, after the champions have their opening dance, everyone sits down at some tables to have dinner. There aren’t any waiters, and no one knows what to do after reading the menu. Until Dumbledore tells his plate “pork chops” and the food magically appears. Harry orders Goulash for himself. After dinner is when the wizarding band The Weird Sisters performs. All of the students are dancing (except Harry and Ron and the Patil twins) as shown in the movie.

There was no food as yet on the glittering golden plates, but small menus were lying in front of each of them. Harry picked his up uncertainly and looked around – there were no waiters. Dumbledore, however, looked carefully down at his own menu, then said very clearly to his plate, “pork chops!”

And pork chops appeared. Getting the idea, the rest of the table placed their order with their plates too.

I decided to try a recipe I’ve been wanting for a long time. Without more description, I had leeway with the recipe. I’ve heard of and seen many recipes for apples cooked with pork, but never tried it. For some reason, the combination always seemed a bit odd. But now that I’ve eaten it, I am a firm believer in the two together! I had a bag of apples in the refrigerator that we hadn’t eaten and needed to use soon.

One of the members of our Harry Potter Club is dairy-free. This was a great recipe to share since there is no dairy in it either.

In a small bowl, mix together all of the seasonings: flour, salt, rubbed sage, minced garlic, thyme leaves, allspice, and paprika.

In a large skillet, over medium-high heat, warm the oil, then add the pork chops. Brown the pork on both sides until they are almost done. Then remove them from the skillet.

Add the onion and cook for about 3 minutes, until they start to soften.

Add the apples to the onion and cook for another 2 minutes while stirring.

In a medium bowl, combine the apple juice, brown sugar, and remaining seasoning mixture together. Return the pork chops to the pan and pour in the juice mix.

Bring it all to a boil, then reduce the heat to low. Cover the pan and let the meat simmer for about 5 minutes or until the pork is cooked.

Serve warm with some of the apple and onions on top of the pork. 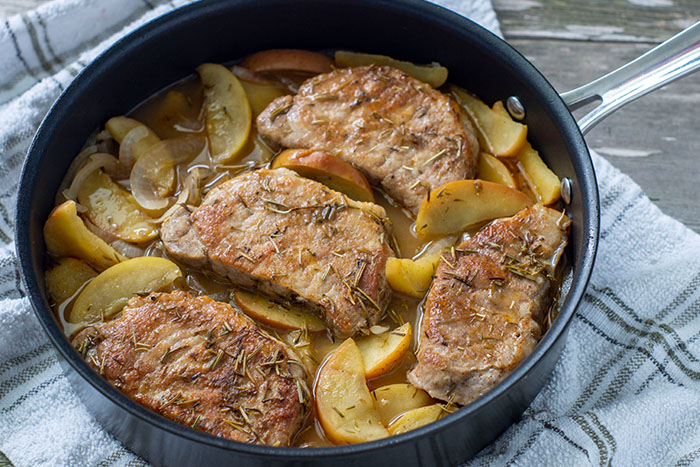