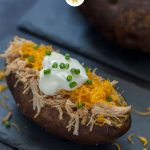 Cook everything, including the baked potatoes, in the slow cooker for a delicious bbq pork potato dinner with lots of flavor and little effort.

Have you ever cooked a “baked” potato in the slow cooker? I hadn’t either until I tried this recipe. I was a little hesitant about how well it would work, but it all came out delicious! The other main ingredient for this dish, the pulled pork, is something that I have done in the slow cooker many times. This recipe is slightly different than my usual pulled pork. But it was a perfect flavor to serve on top of the potatoes. Though it’s different, making BBQ pork potatoes in the slow cooker is an easy meal for busy nights.

A few weeks ago we met a bunch of friends at a local bbq restaurant called Tin Roof BBQ. I know a lot of people disagree, but I don’t like when my bbq tastes really smokey. In fact, I don’t like the smoked flavor much at all. I much prefer to taste the BBQ sauce.

And of course, most Texas bbq is smoked so I have few options when we eat out. I got a grilled chicken stuffed potato and loved it. We started thinking about how we could do it at home. I said I wanted to try with pork instead of chicken this time.

I found a recipe an older issue of the Cooking Light magazine from January/February 2017 that was similar to what I wanted. So I took that as inspiration and ran with it.

The most significant tip I took from the magazine was to wrap your potatoes in parchment paper rather than foil. When you are grilling, this obviously isn’t an option. Since the potatoes were going in the slow cooker, I didn’t have to worry about the paper catching on fire. When left on for hours, the foil would start to give the potatoes a metallic taste.

Start rubbing 3-6 russet potatoes (depending on size) with olive oil. Then sprinkle with about 1/4 teaspoon each of salt and pepper.

Wrap the potatoes in parchment paper and set aside while you make the bbq sauce. In a small mixing bowl combine the brown sugar, tomato paste, Worcestershire sauce, chili powder, and remaining salt and pepper.

Slice the red onions and place those at the bottom of the slow cooker. Then lay the pork roast on top and rub it generously with the bbq sauce. I like to do this once it’s in the slow cooker so any mess stays in there rather than getting on the counter.

Put the potatoes, wrapped in parchment paper, on top of the roast in the slow cooker. Make sure the lid can still close. Cover and cook on low for about 8 hours.

Once it’s done cooking, very carefully remove the potatoes from the slow cooker. Split them lengthwise without cutting all the way through. Shred the roast pork in the slow cooker and stir it to make sure the bbq sauce coats all of it. Top each potato with pork, cheese, sour cream, and green onion and serve warm! 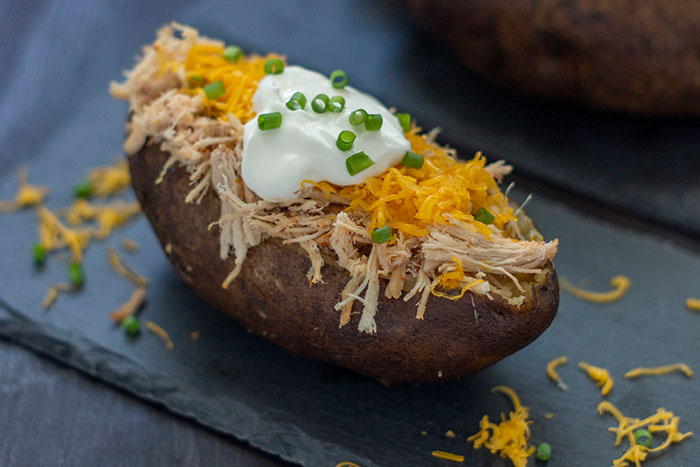 46 thoughts on “BBQ Pork Potatoes in the Slow Cooker”