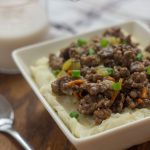 Make a quick version of Shepherd’s Pie that’s packed with vegetables and meat with a beef gravy all served on a bed of mashed potatoes.

I like to take recipes that are complicated and make them simple. Shepherd’s Pie is carefully layered. Then topped with a crust made out of mashed potatoes. Making the filling part usually isn’t too difficult. But trying to get the mashed potatoes to layer, without getting mixed in on accident, and cooking just right, is not so simple. To make it easier, just make it Upside Down Shepherd’s Pie!

Justin and I both said that a version of Shepherd’s Pie sounded delicious while we were working on a meal plan recently. It would also be a great way to use up some of the vegetables we had in the refrigerator. But, again, I didn’t want to deal with the hassle that can come with preparing a traditional shepherd’s pie. So, we flipped it upside down!

Overall, this was a very easy recipe to whip up for dinner one night and didn’t take too long. You can always substitute other vegetables in, depending on your preferences and what you have on hand.

In a large skillet, over medium-high heat, warm the oil and add the beef. Stir and cook until the beef has browned, usually about 7-10 minutes.

Meanwhile, cook the instant mashed potatoes according to the directions. You could also use homemade mashed potatoes. But to keep it simple, instant work just as well. Prepare the vegetables as needed.

Drain the meat and return it to the pan. Then add the onion, celery, carrot, rosemary, and garlic. Cook until the vegetables are tender, about 5 minutes.

In a separate bowl, whisk the beef broth and flour together. Pour the mixture into the pan and bring it to a boil.

Reduce the heat to medium and simmer for about 5 minutes, until thickened. Stir in the salt and pepper. Divide the potatoes among 4 serving bowls and top with the beef mixture. 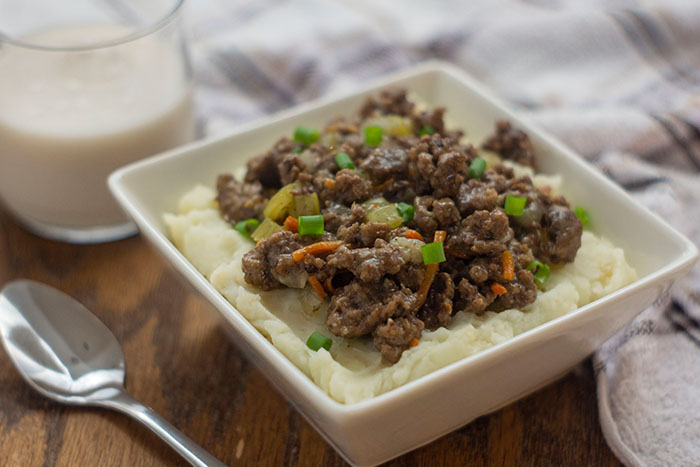 40 thoughts on “Upside Down Shepherd’s Pie”