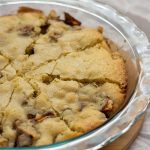 Apple pie is my favorite kind of pie. And this recipe makes it so easy to have any time we want. It doesn’t take much and it’s delicious!

This is the recipe that my family has been using for apple pie for as long as I can remember. Or as my husband calls it “Easy as Pie Apple Pie”! We have it with Thanksgiving and Christmas dinner, and sometimes just because.

Easy apple pie is not a traditional pie. You don’t have a crust, but you pour the crust on the top and it bakes into the apples. I’ve been told this is almost more of a streusel, but I’ve only ever known it as pie.

The recipe is simple to remember, too, since its one of almost everything. One cup of flour, one cup of sugar, one stick of butter, one egg… It was a long time before I ever wrote the recipe down because I just knew it.

Most people save apple recipes for the fall, but I enjoy them year-round. I like to make apple crisp and sauteed apples in the summer since both can be topped with ice cream. Spiked apple cider is a great winter drink. And, of course, apple pie is great for the fall.

Preheat the oven to 350F. Peel and chop the apples into bite-sized chunks. You can leave the peels on if you’d like. I find that an apple  works really well then I cut it into pieces from there.

Place the apples in a pie pan and sprinkle with cinnamon.

In a large mixing bowl, combine all of the other ingredients.

It will form the consistency of a cake batter.

Pour the batter over the apples, trying to even it out as much as possible. The batter doesn’t have to cover everything, though.

Bake the pie for about 45-60 minutes or until the crust is golden brown. 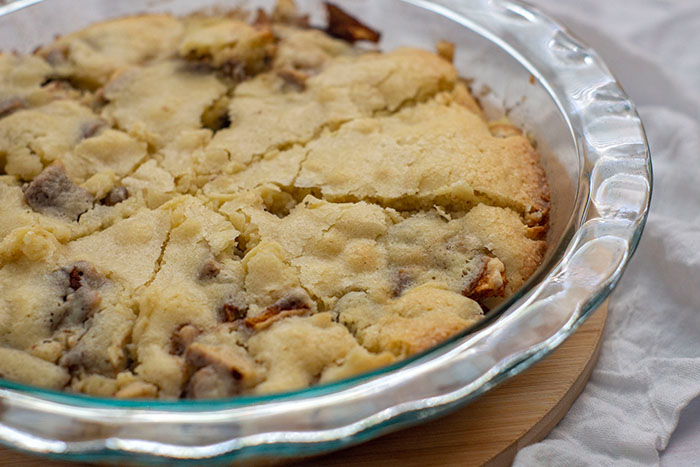 Apple pie is my favorite kind of pie. And this recipe makes it so easy to have any time we want. It doesn’t take much and it’s delicious!
Prep Time 15 minutes
Cook Time 45 minutes
Total Time 1 hour
Course:
Dessert
Cuisine:
American
Keyword:
apples
|
holidays
|
pie
Servings: 8 pieces
5 from 5 votes