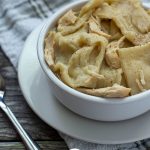 Chicken and dumplings is a perfect meal for a cold winter evening, or when you just want some southern comfort food to warm your soul.

One of Justin’s favorite meals is chicken & dumplings. His family has them at Thanksgiving every year. I had never heard of dumplings for holiday meals until I met him and went to his grandma’s for the first time during the holidays. We also often have them around Christmas. It is his birthday, after all, so he gets to pick the meal.

Before meeting Justin, I had only ever had chicken & dumplings if we were out somewhere, never homemade, so I was intrigued! After watching both his mom and grandma make their homemade recipe, I wrote it all down and have been making it that way since.

Making it homemade takes some time, but it’s worth it in the end. This is one of those meals, like homemade Pierogi and Chicken Noodle Soup, that I only make on the weekend. I try to make these a couple of times per year since Justin loves them so much. But, if we need a quick meal, I also have a recipe for Chicken and Dumplings in the Slow Cooker.

Through trial and error, we have found the biggest secret to delicious dumplings is to make sure they have plenty of time to cook in the broth. The dough soaks up a lot of the flavors in the broth, so they need time to sit and simmer.

Also, making the dumpling dough with chicken broth rather than water adds a lot of flavor, too. One year we tried to cheat and bought frozen dumplings, but it just wasn’t the same.

Place the chicken in a large stockpot and cover with two cups of chicken broth. Set the heat to high and bring this to a boil.

Reduce the heat to medium and simmer, covered, for about one hour. Move the chicken now and then just to make sure it isn’t sticking to the bottom of the pan. If the liquid starts to evaporate too quickly, add more water or broth as needed.

Meanwhile, in a large mixing bowl, mix together the flour, 1/2 cup of chicken broth, and one egg. Add more flour as needed so the dough isn’t sticky.

Sprinkle a work surface, your hands, and a rolling pin with flour and turn the dough out.

Use the rolling pin to spread out the dough as thin as possible. The dumplings thicken as they cook, so you want them to start very thin.

Use a pizza cutter to make squares that are about one-inch square.

When the chicken is finished, remove it from the stockpot (leaving the broth in the pot) and shred the chicken. Add 2 1/2 cups of chicken broth to the stockpot plus 6 cups of water. Bring all of this to a boil.

Carefully add the dumplings to the stockpot. You will want to make sure they don’t stick together as they are placed in the pot. Once they are in there for a few seconds, they don’t stick. Just place them around the edges as you go and it should be fine.

After all of the dumplings are in the broth, add the chicken and bring it back to a boil.

Cook for about 15 minutes, until the dumplings are soft. Serve warm and sprinkle with pepper, to taste. 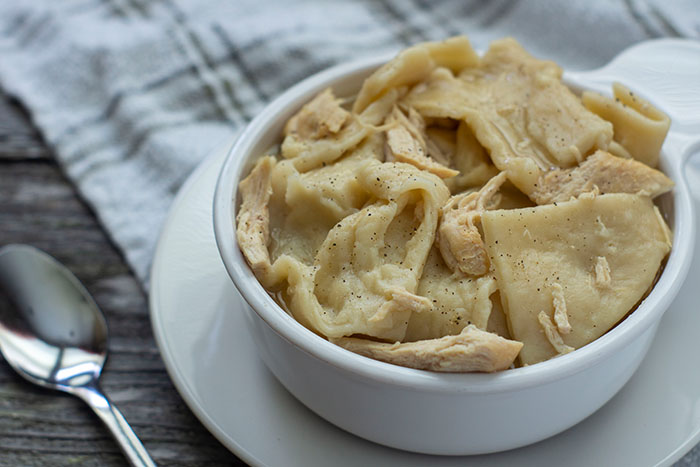 36 thoughts on “Chicken and Dumplings”