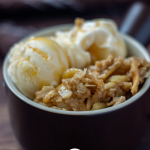 Apple crisp is a delicious dessert with warm cooked apples and a crispy topping. Perfect on its own or with a scoop of vanilla ice cream!

Before I met my husband’s parents, I had never had anything like apple crisp before. My mother-in-law makes it for dessert every few months using apples. I had to get her recipe because it’s so good and Justin enjoys the dessert.

It reminds me of apple pie, but without the crust, and crunchy. It’s a little hard to explain, but trust me, it’s delicious! She sometimes doubles the recipe for the crisp part because the crisp is so good.

Apple Crisp is delicious on its own, and even better when it’s nice and warm and served with a scoop (or two) of vanilla ice cream! Of course, I love ice cream and will put it on almost any dessert.

Apples are one of my favorite fruits, so I always make this with apples. But you could also make it with other fruits as well. It can change the flavor for your tastes or for the season. We’ve made it with both apples and peaches before. They had very different flavors, but still both delicious in their own way!

Since it makes an entire casserole dish full, this is also a perfect recipe for bringing to a potluck if you are assigned a dessert.

The apples (or similar fruit) need to be peeled and sliced. I have made it with the peels on before because

Preheat your oven to 375F and peel the apples then slice them thinly.

Place the fruit in an 8×8 baking dish or casserole dish and stir in the sugar.

In a medium bowl, combine the oats, brown sugar, flour, and cinnamon and stir.

Use a pastry blender or two butter knives to cut the butter into the oats mixture. This is the hardest part, but it helps if you let the butter soften just a little before using it. You don’t want the butter melted, though. I tried that one time and it didn’t work as well. The mixture won’t be smooth but should be coarse crumbles.

Sprinkle the crumb topping over the fruit. It’s ok if it doesn’t completely cover the fruit. Bake for about 30-35 minutes until the fruit is tender and the topping is golden brown.

Let stand for a few minutes and serve warm, preferably with some vanilla ice cream on top. 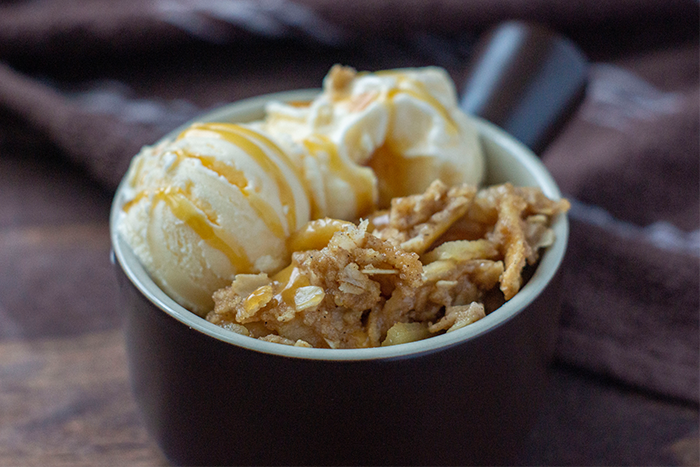