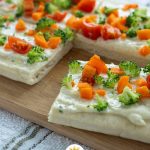 Great as an appetizer, Veggie Pizza is made with a dough crust, ranch ‘sauce’, and fresh veggies on top. Easily customize to your tastes and enjoy!

Veggie Pizza is yet another family recipe. Again, I have no idea where it came from, but we have been making it as long as I can remember. I have seen other recipes for something similar online, but never anything exactly the same. I used to call my grandma once a month asking her for the recipe before I finally remembered to just write it down!

The original recipe was made using crescent rolls. I tried that a few times. But I found the pizza crust easier. It comes in a can near the rolls. It doesn’t fall apart as easily and cooks a little better.

I’ve used the base to make a veggie dip before, too. It’s a great recipe to have out as an appetizer without the crust. Combine the ingredients for the “ranch sauce” and dip fresh veggies in it.

Veggie pizza is also great for getting some veggies in. It combines some of my favorite things: a bread crust, ranch dipping, and raw veggies. I can also use this to get my picky kids to eat some vegetables too. Score for mommy!

Veggie pizza can be customized for different people. I don’t care for raw tomatoes, so I usually make half with (because Justin does eat them), and without for me. You can also use other vegetables, such as peppers, on these if that’s what you like too.

You can serve veggie pizza immediately. But I prefer it to be cold. It can be stored in the refrigerator though it’s best the day it’s made. After that, the crust will start to get a bit too moist. So, veggie pizza is something that can be made ahead of time. Just not more than a day early.

Another option for making it ahead of time would be to cook the crust and store it at room temperature. Mix the cream cheese spread and refrigerate, and chop the vegetables ahead of time. Then, it would only take a few minutes to prepare the pizza when it’s time to serve.

Spread the pizza crust out on your baking sheet or stone and bake as directed, until the crust is golden brown.

Once the crust has mostly cooled, spread the cream cheese mixture onto the dough. Try to get it as even as possible and close to the edges.

Sprinkle your vegetables on top of the cream cheese.

Cut into squares. Then refrigerate and serve cold. 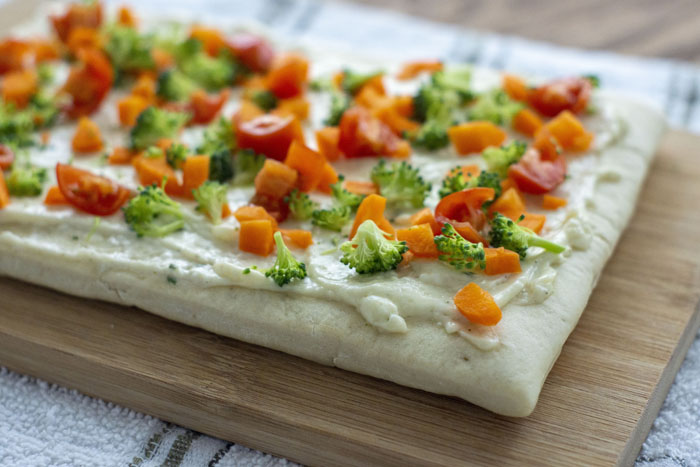