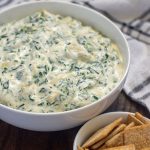 There are two ways to easily make a delicious spinach artichoke dip. Try it either on the stovetop or in a slow cooker.

Christmas 2017 was very different from previous years. Old traditions were broken. New ones were started. We had a total of 21 people around the Christmas Tree this year. Some traditions, such as my dad’s Spinach Artichoke Dip, stayed the same.

One of the recipes made for our Christmas Eve get-together was my dad’s Spinach Artichoke Dip. The original recipe is for a slow-cooker, but he always makes it in a pot on the stovetop. It cooks up just the same and is much quicker. Then he gets a large pumpernickel loaf and cuts the top off and hollows out most of the bread. He serves it in the bread bowl with the rest of the bread to dip. But it’s also delicious with crackers, too.

Add the spinach and artichoke hearts until the spinach has wilted. Stir in the parmesan and cheddar cheeses until they have melted.

Serve warm with crackers or bread to dip.

In a medium mixing bowl, combine the cream cheese and half and half until they are well blended. Add the onion, garlic, spinach, and artichokes, stirring well.

Put the entire mixture into the slow cooker. Cover and cook on high for 1.5 hours.

Add the parmesan and cheddar cheese and cook another 15-20 minutes, until the cheese has melted.

Stir the dip one more time and serve warm with crackers or bread to dip. 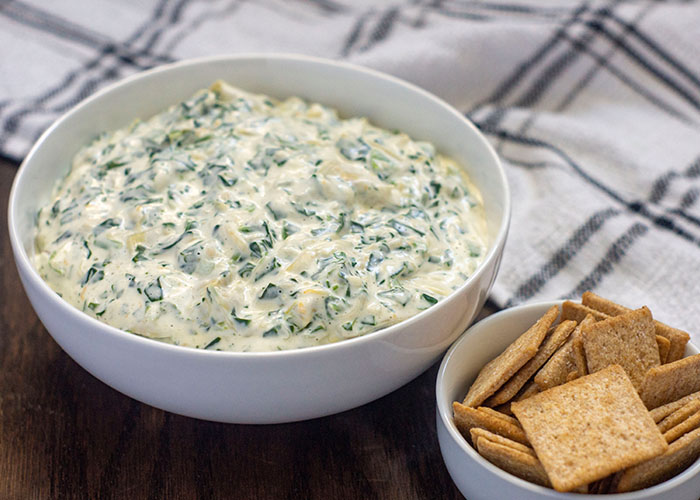 Since moving to Texas just before Christmas of 2014, we hadn’t been back to Florida with my family for the holidays. My grandparents had always had their entire family together for Christmas until 2011 when I went to Justin’s parent’s house with him. We were with my family in 2012. And in 2013 we decided to stay home. It was Tyler’s first Christmas. We wanted him to have Christmas at his own house.

So far, I am the only person who has ever missed so many Christmas Mornings with the whole family. My parents came to our house for Tyler’s first Christmas, but they have been there every single other year.

This year, we decided it was time to make a trip back to Florida for Christmas with my family. It’s different than what we usually do now. And very different from what Justin’s family does. But it’s how my family has always done the holidays.

Initially, we were planning to make the long road trip to Florida because we couldn’t find decent ticket prices to fly. When we were visiting in October, Justin happened to check filghts. We could fly cheap with Spirit, so we booked the flights immediately. The days were slightly different than we were planning, but we couldn’t beat the price.

We flew to Florida on December 19th and headed home December 28th. Besides having some 24+ hours stomach bug on Christmas Day, we had a great Christmas. Before we left, we did a Christmas at home with just our family, and then went to Justin’s parents for Christmas at their house.

So, as I mentioned, we broke quite a few traditions this year:

About the only constant was making the Christmas Sandwiches. We’ve always done Christmas Morning at my grandparent’s house, but this year we had 21 people here, including four children aged 4 and under. Their house just doesn’t have space in one room for that many people. Couple that with the fact that my parent’s house is more kid-friendly and it just made sense to move it to my parent’s house.

For this same reason, we also moved our Christmas Eve family get-together to my parent’s house. We all hung out and had some food on the back porch, and my dad had a bonfire going. The kids were able to play together for a while, and we even had a special visitor to the house for the kids!

Christmas Morning we woke up and I was feeling so sick. My parent’s made some cinnamon rolls for everyone. We were all sitting around the tree by 8 am getting started on our stockings first, then the rest of the gifts. My family goes just a little overboard with the presents, but you have to remember, this is for 21 people.

After we finished with gifts, everyone went home. Some went to my grandparent’s house for their clues to their big gifts. Now that I’m married I’ve been cut off from clues. As I mentioned, I had a stomach bug so was feeling horrible. I laid down to take a nap, and my parents took the boys to a park to let me rest.

Later that evening, we had our Christmas Dinner over at my aunt and grandparent’s house. They live next door to each other, so we had both backyards. They had the whole yard decorated with hundreds of lights, the cornhole boards were out, giant Jenga, and a bonfire.

We had our dinner, then my cousin’s girlfriend introduced our family to one of her family traditions called the Peppermint Pig. It’s a big pink pig made of peppermint that gets placed in a bag. Everyone takes turns making a wish for the new year and taking one hit with the little hammer to break the pig. Once everyone has had a chance to make their wish, we all take a piece of the pig to eat. Even the boys got in on this one.

Of course, no dinner is complete without desserts. We had a couple of desserts available, and I got a couple of candles to put in one of the cakes so we could sing Happy Birthday to Justin.

The last thing we did before heading home to get my cranky boys to bed was a saran wrap ball game. A couple of days ago my grandparents and a few others used a few rolls of saran wrap, cut into pieces about one to three feet long each, and wrapped it into a giant ball with a bunch of prizes. One person started with the ball while the person next to them had a pair of dice. The person with the ball begins to unwrap while the person with the dice has to roll doubles. Once doubles are rolled the ball and dice are passed on. You get to keep anything that you unroll. It was fun, but also seemed like a lot of wasted saran wrap!

Overall, other than feeling like crap all day, we had a great Christmas with my family. My boys got so many gifts! We had to pay for an extra suitcase on the way home. We had a wonderful visit with my entire family. It’s the first time we have all been together for about a year and a half.