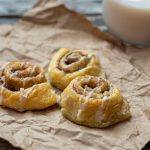 Craving cinnamon rolls but don’t have any? Use crescent rolls and cinnamon-sugar to make Mini Cinnamon Crescent Rolls from home in less than 30 minutes!

A few years ago, I remember wanting some type of cinnamon rolls for breakfast, but we weren’t going to go out. So I started trying to think about what we had and what I could use to try to make our own cinnamon rolls. Well, we didn’t have some ready-to-bake cinnamon rolls. We had some crescent rolls, and those are similar. I had cinnamon and sugar in the pantry. Let’s do this! Mini Cinnamon Crescent Rolls it is!

One batch of cinnamon crescent rolls makes enough for 2-3 people. It was almost too much when it was only Justin and me and while the boys were really little. Although, the last time we made these, I think the boys both ate more than me, so it’s about time to start doubling.

Yes, we are stereotypical Americans in our house and love sweet breakfast foods. And no one enjoys breakfast here as much as Tyler. Ryan, on the other hand, just wants to eat no matter what the food is.

We’ve tried a few other recipes for cinnamon rolls over the years, but this is the easiest. My favorite is still the Jumbo No-Yeast Cinnamon Rolls. And making the dough in the bread machine is another good option. But those all take more time. I can have these ready and baked in less than half an hour. It’s great for lazy mornings!

Start with a package of regular crescent rolls, and keep them in the rectangles they come in. Don’t fully pull them apart to triangles, keep two triangles together. Pinch the edges so they stay together as you work with them. I like to do this right on the baking stone so there is less mess to clean up.

Cover the crescent rectangles with a small layer of butter. Using the back of a spoon will spread tub butter easily without tearing the rolls. Just make sure you are gentle and it won’t be a problem.

Starting with the shorter end of the crescent rolls, carefully roll them up. Pinch the edges to seal seam.

Cut each roll into five pieces and turn the pieces on their sides to lay on a flat side. These become your mini cinnamon rolls.

Bake for 10-12 minutes, until the rolls start to turn golden-brown and the dough is no longer soft.

Meanwhile, whisk the powdered sugar, creamer, and vanilla extract in a small bowl until it’s smooth. If you don’t have coffee creamer or don’t want to use it, you can substitute for either milk or apple juice.

Drizzle the icing over the warm cinnamon rolls and serve immediately. 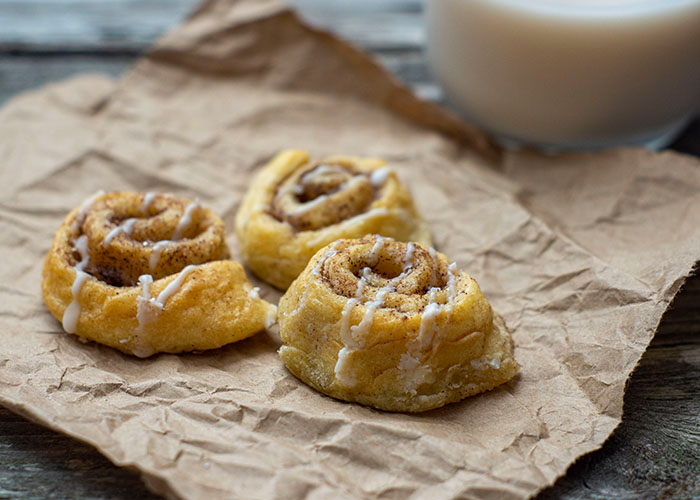