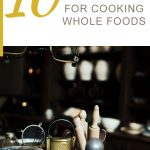 Once I started cooking more from scratch, there are a few kitchen gadgets that I just can’t cook without and must have in my kitchen.

It’s no surprise I spend a lot of time in the kitchen. I enjoy baking and cooking and everything involved with that. Ok, maybe not the clean-up so much, but it’s a necessary part of the process, so I deal with it. Over the last few years, since I have really started to get into cooking, I have realized there are some kitchen gadgets that I just can’t cook without. Some of these were gifts, some were bought with a specific need in mind, and others are just common kitchen items that help me feel like I have a well-stocked kitchen!

We were gifted a Kitchenaid stand mixer for our wedding and I love it. I don’t like to keep things on my counter, but I make an exception for my stand mixer. It gets used for everything I can. I use the whisk attachment for mixing up sauces and batters, the flat paddle is great for stirring things with chunks like chocolate chip cookies and also works great for shredding chicken (one of my favorite uses for it!), and I have some of the shredding and slicing attachments as well. It’s a great tool that can do a huge variety of things in the kitchen for you!

There is no comparison between store-bought and homemade bread. Whenever possible, I make my own bread. I don’t use it much for things like sandwiches, but if we are having any kind of pasta or chili or soup and want some bread with it, I always make my own. I was given this bread machine for a wedding shower gift and use it often. It also can be used for dough and I have a great homemade pizza recipe that I use the bread machine to knead the dough for me.

Years ago, I used to just use a regular steak knife for chopping veggies and other ingredients when I cooked. I had an entire block of knives that I never touched. I was at a friend’s house one time and she was using a chef’s knife to cut everything and I realized that looked much easier and, although it’s a much bigger knife, also looked safer. It’s more of what that kind of knife is intended to be used for. Now I use my chef’s knife for everything. I haven’t quite figured out most of the other knives on the block yet, but I do know this one well!

I admit, I was skeptical at first about a garlic press. Does it really work? How well? Is it hard to clean? Yes, very well, and no! I had it on my wish list for a while, but was getting so tired of mincing garlic by hand, that I decided to give it a try, and I am so glad I did! You can mince fresh garlic without having to take it out of the peel, which saves me sooooo much time! I was also at a cooking class one day and someone mentioned that it also works with ginger. The next time I had a recipe with ginger I decided to try it, and it worked with that as well. I haven’t experimented with anything else, but it is so worth it just for those two things!

The knife set that we received at our wedding came with a set of kitchen shears in it. I didn’t really use them for much at first until I saw this post about their uses and I started to use them more and more. They are used for everything from cutting the fat off chicken to cutting up fresh herbs and veggies to opening packages. I only have one pair right now but it’s on my list to get another pair so I can try to keep one for meat and one for other foods.

We got a cheese grater for a wedding shower (I think, maybe for the wedding), and I hardly ever used it. In the last couple months we have started to buy our cheese in blocks and grate it ourselves. It tastes better and fresher, and doesn’t have any additives in it that I don’t want to feed my family. So now, this little cheese grater has been getting a lot more use!

This is another one of those items that I thought seemed a little unnecessary. I don’t use it very often, but for the recipes I do need something to be sliced very thin, this is a life saver! There are so many attachments, I haven’t even used them all yet, and still can call it one of my favorites. I forgot until writing this that it has a grater on it, I may need to try that next time I need to shred some cheese.

It’s been so hot here in Houston that I haven’t been in the mood to bake much lately and warm the house up even more. But as it starts to cool off, I will be baking lots of cookies and pumpkin recipes and delicious holiday treats. One thing I have learned over the years is that it really does make a difference if you sift the flour into a recipe. I bought a cheap sifter at Walmart a couple of years ago, and it works perfectly fine for what I do. I also use it to put some powdered sugar on brownies when I make those too.

I LOVE having non-stick pans. I know some people don’t like them and prefer cast iron or stainless steel, but not me. My non-stick are great and they are so easy to clean. We got a set of the Emeril pans for our wedding and they are holding up great after 4.5 years of use. There are very few things that I still have to put a little oil in the pan before cooking since nothing really sticks to these.

Ok, not technically a kitchen gadget, but it helps me a lot when I am cooking. Years ago we bought a stand for the iPad, and now I use that in the kitchen since a lot of my recipes are saved on my Evernote account or are ones that I pull up online to cook from. I also have a stand for my cookbooks as well, since a lot of my recipes come from my 100 Days of Real Food cookbooks.

These are the next items on my list of kitchen gadgets that I want to add:

I received some of these items for Christmas! The rice cooker is amazing, now I don’t make a disaster of my microwave when I try to make rice! I also got the bamboo so with that and the rice cooker we can make homemade sushi now. We also got a new Magic Bullet which is so nice now that it works every time I try to use it!!

What did I miss? What’s your favorite kitchen gadget?