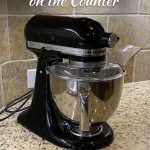 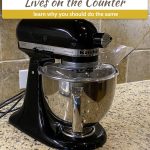 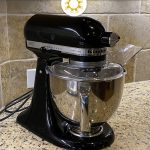 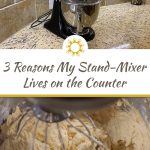 I would be lost without my stand mixer in the kitchen. I use it so often it lives on the counter in my otherwise uncluttered kitchen.

Anyone who has been to my house can attest to the fact that I keep very few things out on my counter. I like a nice, clean, organized, uncluttered workspace in my kitchen. One exception will always be my stand-mixer. It will always “live” on the counter for multiple reasons.

When Justin and I got married, the owners of his company went together and bought us the Kitchen Aid Stand Mixer that we had on our wedding registry. Honestly, that was one of those things that I put on there as a hope and dream but didn’t think anyone would actually get it for us.

I was so excited when we opened that big, heavy box! It came with a note that said they expect some delicious baked goods to be delivered to the office. One of the first things I ever made with it was my cinnamon sugar cookies and brought some to Justin’s office and the one that I work from home for. They all loved the cookies, and I fell in love with my mixer that day!

Ok, first and foremost, this thing is pretty heavy. 26 pounds actually, which is not much less than Ryan weighs right now. I use this way too often to have it in a cabinet or the pantry and have to pull it out every time. When we eventually build a new house (dreaming again) I would love to have an area dedicated to baking. And that would include a place for the stand mixer to live. But for now, it will live in the corner on the kitchen counter because I do not feel like lifting it out every time. Then again, it would be a good workout!

The stand mixer comes with a few attachments: the wire whisk, the flat beater, and the dough hook. I have used all of these, mostly the flat beater. The wire whisk is great for anything that needs to be whipped, such as a batter or making a homemade whipped topping. I did find out the hard way that it’s not great for mixing chocolate chips or other hard things. I ended up bending one of the wires and now it sounds funny when I use it. Typically, I make my doughs in my bread machine, so don’t use the dough hook very often. The flat beater is my go-to attachment.

Plus, there are so many additional attachments that you can get for the mixer. I have the KitchenAid Slicer and Shredder Attachment that I have used for shredding up some cheese. There are also two pieces that can be used to slice vegetables as well. And that isn’t the only attachment, there are so many options that can be added to the machine that makes it the ultimate kitchen machine.

There are so many wonderful ways to use the stand mixer. I use it for everything from making cookie dough to whisking pancake batter to shredding chicken. I was amazed when I looked up shredding chicken one day and saw something about a stand mixer. So a little more research showed me that it’s so simple to shred chicken, even when it’s still too hot to really handle! Just throw your cooked chicken in the mixer with the flat paddle, and turn it on to either stir or 2. You want to watch because it will work quickly and if you do it too long you will have chicken mush. But it seriously takes me a minute to shred chicken that would otherwise take closer to 5-10 minutes!

Justin has used the mixer to make a homemade coffee creamer, and I have used it for mixing marinades and banana bread. It’s made my pumpkin pie and granola bars. And all that is just with the actual mixing function, not any of the extra attachments.

Needless to say, our stand mixer is one of the most-used gadgets in the kitchen, so it deserves a spot on the counter!