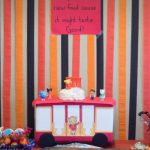 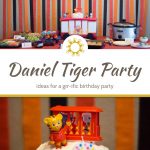 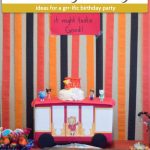 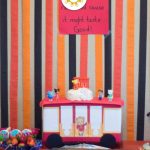 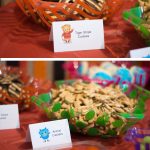 Have a Daniel Tiger lover in your house? Ideas for a cheap, DIY Daniel Tiger themed birthday party including decorations and food.

My oldest is 3! When did that happen?! And how do I have a three-year-old? It’s funny how it seems like forever ago that we were called to head to the hospital for my induction with Tyler. Yet at the same time, it’s hard to think of a time that we didn’t have Tyler. Three years seems so short, but also seems so long. It’s crazy how time works. Tyler is growing to be such a funny, adorable, crazy, outgoing, wonderful boy. And he is all boy. He loves to play outside, although he doesn’t always like to get dirty. He plays with anything that has wheels, Olaf, or Lightning McQueen and Tow Mater. Tyler is a little ball of energy and literally bounces out of bed every morning and hits the ground running and is just go go go until bedtime!

As I mentioned the other day, Tyler is currently obsessed with the show Daniel Tiger’s Neighborhood. We have seen every episode on Netflix multiple times and know every song. We only do things if they are what Daniel Tiger does. Seriously, everything in this household is currently based on a Daniel Tiger song/episode. About a month ago I started asking Tyler what he wanted to do for his birthday, and he said Daniel Tiger. I said I can also do Cars, Olaf, trains… nope, Daniel Tiger. He never wavered from that. Ok, Daniel Tiger it is!

I again took to pinterest to see what I could find for a Daniel Tiger birthday party. And surprisingly, I found quite a few ideas! Some of them were more of a jungle theme with tigers, but it still gave me some ideas. I posted the other day about the trolley I made for a dessert tray to put the cake on.

We didn’t do a lot of decorations. I’ve had some multi-colored food trays for years that I used for the food. We went with red, black, and orange for colors. As a tiger, Daniel is orange and black. And he wears a red sweater, so the colors were easy.

I tried to keep the food as simple as I could. After all, we had quite a few three-year-olds at the party. They like simple finger foods.

I made some quick signs on the computer for each of the foods. The signs stood easily since I printed them on cardstock and folded them in half. I did use a tiny piece of tape on the back so they wouldn’t fall off of the table.

After a few cake mis-haps, we actually ended up with just one small cake for Tyler as I always intended to have, and store-bought cookies for everyone else. I baked the cakes the night before, and I was going to make cake pops out of the large one for guests. Well apparently I don’t know how to make cake pops because they would not stay together. And I couldn’t get the chocolate to melt properly even though it was melting chocolate. So then I tried shaping them into squares to be cake brownies and that didn’t work either. So I threw it all in the trash and sent Justin to the store!

Even with all that, I like how everything else came out. I had ordered a Daniel Tiger and trolley cake toppers, so put those on the cake. Justin’s parents got him some Daniel Tiger figurines for his birthday, so they gave them to me that morning to be able to put with his cake.