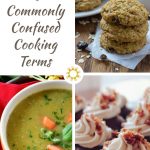 There are some terms that often get confused when it comes to cooking. I’ve broken down some of the most common cooking terms and what they really mean.

Have you ever read a recipe and were a bit confused about some of the terms? Or have you wondered what the difference was between things that seem the same?

These terms seem to often be used interchangeably. But there has to be a difference in them. Otherwise, why would they be different words? Other than, you know, the English language can be really confusing in itself.

When I was working on my peppermint blondies last week, the original recipe that I based it off called it an icing but I kept saying frosting. So this made me wonder what the difference really is.

So according to that, there really isn’t much of a difference in the two terms. Typically frosting is able to be spread on something. For example the frosting on a cake or the frosting on the brownies. Icing usually refers to one that is thinner. It can be drizzled on something. Such as the icing that comes with a container of cinnamon rolls.

So this one also had me intrigued while working on the peppermint brownies. I know what dough is when it comes to bread products. But what’s the difference between a brownie batter and a cookie dough? Why do we call one dough and the other batter?

Dough: flour or meal combined with water, milk, etc., in a mass for baking into bread, cake, etc.
Batter: a mixture of flour, milk or water, eggs, etc., beaten together for use in cookery

Again, not much of a difference. From looking through a few different sources, it seems that it mostly has to do with the consistency. One that is more of a liquid is considered a batter. And anything that’s more firm is typically considered a dough. This explains why cookies are made from a dough. It’s thick enough to scoop. Brownies are made from batter because it’s a liquid that can be poured.

I know there’s a difference. One can’t be substituted for the other. But what is the difference?

Baking Soda: sodium bicarbonate
Baking Powder: any of various powders used as a substitute for yeast in baking, composed of sodium bicarbonate mixed with an acid substance, as cream of tartar, capable of setting carbon dioxide free when the mixture is moistened, causing the dough to rise

Well now that we’ve cleared that up….. Or not. Basically, baking soda is used to react with an acid in a recipe, such as brown sugar, to create the carbon dioxide needed to help your baked goods rise. This is usually used for cakes and cookies and similar recipes.

Baking Powder is made with baking soda and a few other ingredients. Baking Powder is a leavening agent. It gets activated twice. First when it comes in contact with any wet ingredients and second when it is heated. Since it contains both an acid and a base (baking soda), it is usually used in recipes that don’t have an acidic ingredient in them.

Stock vs Broth vs Consommé

Broth: any liquid that has had meat, fish, vegetables, or legumes cooked in it
Consommé: a clear soup made by boiling meat or chicken, bones, vegetables, etc., to extract their nutritive properties

Stock: liquid frombones, simmered for a long time to extract their gelatin and flavor

Broth also is usually seasoned. It can be consumed as it is with little to no additions. Stock is unseasoned. Consommé is made from taking a broth and adding egg whites and lean ground meat to the top while simmering. Those pull all the tiny food particles out, leaving a clear liquid behind.

In general, a broth is used when it is going to be consumed as is, or with very few things added. Stock is used for making more elaborate soups or sauces when you will be adding a lot of seasonings. Consommé is good for serving hot, as is, similar to a broth.

During the holidays, family and friends talk about what they make for their big family dinners. Some mention sweet potato casserole, others mention candied yams. But they both seem to be talking about a similar dish. Are sweet potatoes and yams the same thing? They get interchanged often, but what are they?

Sweet Potato: a plant, Ipomoea batatas, of the morning glory family, grown for its sweet, edible, tuberous roots
Yam: the starchy, tuberous root of any of various climbing vines of the genus Dioscorea, cultivated for food in warm regions

Umm…. what? So are they the same? No, they are very similar, both starchy tubular roots that come from plants. But they come from different plants. And from my research, most people have never actually eaten a yam. They are imported from Asia and Africa and are often in specialty stores only.

Still confused? Don’t look at the name on the labels. Just know if you want a firm potato and grab the paler ones, or a soft potato and grab the copper ones. PS: sweet potato casserole is usually made from the soft ones, labeled yams. So should we call it yam casserole?

Oftentimes, recipes say to garnish with lemon zest or to add orange rind to something. I have a zester tool that works great at shredding little pieces of the rind of a lemon. So am I using a lemon zest then or lemon rind?

Zest: the peel, especially the thin outer peel, of a citrus fruit used for flavoring
Rind: a thick and firm outer coat or covering, as of certain fruits, cheeses, and meats

So the zest is the outermost part, and the rind is the entire peel of a fruit. When you are making a recipe that calls for zest you are going to use just the outermost part, which is where all the flavor happens to be on the rind. Once you get to the white part of the rind you have gotten to the most bitter part of the fruit. The zest has almost all the same flavor as the inner part. You just don’t get the chunks and liquid from the fruit.

Jelly vs Jam vs Preserves

Ok, this one still baffles me. The boys say they want a peanut butter and jelly sandwich. The stuff I have in the refrigerator is technically a preserve. And then when you go to the grocery store, there are not only jelly and preserves but also jam. So which one do we really want?

Jelly: a food preparation of a soft, elastic consistency due to the presence of gelatin, pectin, etc., especially fruit juice boiled down with sugar and used as a sweet spread for bread and toast, as a filling for cakes or doughnuts, etc.
Jam: a preserve of whole fruit, slightly crushed, boiled with sugar
Preserves: to prepare (fruit, vegetables, etc.) by cooking with sugar, pickling, canning, or the like

For the most part, the difference comes down to texture. A jelly is strained when prepared so there are no chunks of the fruit left in it at all. Jam is made from fruits that are chopped and crushed or pureed. A bit of the pulp is left in there giving it a slightly chunky texture. Preserves use either large pieces or the entire fruit when being prepared. Those pieces are left in leaving it with large chunks of fruit and the thickest texture of the three.

Knowing this, when you are making foods such as a pb&j, it really comes down to preference on which you prefer. Now that I know the difference, I can say I prefer a jam or preserve over jelly. There’s just something strange about it being so smooth to me that I don’t like, and the chunks of fruit in jams and preserves add to the flavor.

40 thoughts on “What Do They Really Mean? Commonly Confused Cooking Terms”