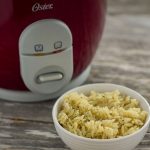 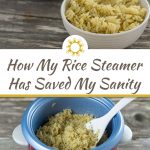 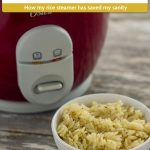 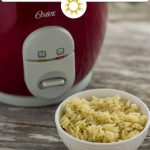 Before having a rice steamer, I would avoid meals with rice because it was such a pain. Now, I love cooking dinner with rice in them!

I got a rice steamer for Christmas last year. I swear that thing has saved my sanity in the kitchen! Ok, maybe that’s a bit of a stretch, but it really has helped a lot with so many meals!

I used to get so frustrated at the absolute mess that I would make when cooking rice in the microwave. Or the few times I tried it in a pot I was also focused on making the other components of my meal that I would forget to stir and the rice would all burn to the bottom. Either way, rice was seriously making me angry. For a while, we just stopped having meals with rice because I couldn’t handle it.

The steamer that I have is the Aroma Housewares 6-Cup Pot Style Rice Cooker and Food Steamer. Of course, I have it in the red color because it’s such a pretty color. The best part, it’s not even $20. I seriously wonder why I didn’t get it sooner at that price point.

Looking through the manual and the description and reviews online, you can also use this to warm up soups, chilis, dips, and other things like that. I personally have not tried this with it yet, since I usually make a large batch using my slow cooker. But I can see how it would be perfect for someone living by themselves or for a couple.

Set the Rice Steamer and Go

One of the best parts is being able to set the steamer and forget about it. It only takes a minute to get the water and rice in the steamer. Plug it in, turn it on, and it does the rest for you. I love how easy it is to get the rice cooking so I can focus on preparing the rest of the meal.

The one thing I have learned, though, is that it takes a bit longer to steam the rice this way than just microwaving it like I used to. I have to get the rice started before starting anything else. But other than that, it makes it so much easier.

And even if you accidentally set the rice too early, once it is finished, the machine switches itself over to “keep warm”. It no longer cooks the rice, but (obviously) just keeps it warm.

Oh, my gosh, using this rice steamer is soooo much cleaner than trying to cook the rice in the microwave like I used to do. I would put the rice in a large bowl and cover it with water, as directed. Cover the bowl with a paper towel, and cook. No matter what I would try, doing it only a minute at a time, covering it better, it would always make a mess. Water and rice would rise and leak over the edge of the bowl and get all over the bottom of the microwave.

When I use the rice steamer, the mess is all contained within the machine. After cooking the rice, there are only two things to clean: the bowl that the rice cooks in, and the lid for the steamer. That’s it. No cleaning the microwave afterward as well.

In addition to steaming rice, this also comes with a basket that fits on top of the rice. It can be used for steaming vegetables or other similar foods. And the best part, you can do this while also steaming rice. So you can get two of your side items done at one time by cooking the rice and steaming some broccoli or beans or other vegetables.

I used to have a separate steamer that I would use for vegetables. But it wasn’t near as easy to use or clean as this rice steamer is. Since the machine is made for steaming the rice, you have to set your own timer for the steamed vegetables. To me, that isn’t too big of a deal. The manual that came with the steamer included suggested times for multiple different vegetables to give you an idea of how long to steam them. The softer vegetables, such as broccoli, don’t take near as long as the harder ones, such as asparagus.

15 thoughts on “How a Rice Steamer Has Saved My Sanity”