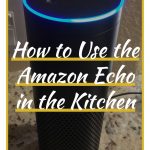 I’ve had an Amazon Echo in the kitchen for over a year now, and it definitely comes in handy when I am cooking and cleaning.

It’s been over a year now since we got an Amazon Echo and I have to say, I love it. I never thought I would use the Echo near as much as I do, especially in the kitchen. Of course, we use it for other things around the house too, but it has made the most significant impact in the kitchen for me. Yes, I know some of these things are just convenience reasons, but it does make some things in the kitchen easier when I am cooking.

What is the Amazon Echo?

Per Wikipedia: “Amazon Echo is a smart speaker developed by Amazon.com. The device consists of a 9.25 inch (23.5 cm) tall cylinder speaker with a seven-piece microphone array. The device connects to the voice-controlled intelligent personal assistant service Alexa, which responds to the name ‘Alexa’. This ‘wake word’ can be changed by the user to ‘Amazon’, ‘Echo’ or ‘Computer’. The device is capable of voice interaction, music playback, making to-do lists, setting alarms, streaming podcasts, playing audiobooks, and providing weather, traffic, and other real-time information. It can also control several smart devices using itself as a home automation hub.”

In other words, it’s a speaker with a microphone that sits in the house and responds to voice commands. You also have an app on a phone or tablet that connects to the Echo for setup and more interaction. There are many different ways to use the Echo, but we use it most in the kitchen.

I used to keep a piece of paper on the side of the refrigerator to write down anything that we run out of between grocery trips. This worked, but often we would just write it in a straight list, and I would have to rewrite it because I like having my list separated into sections. Also, more often than not, I would be in the middle of cooking when I use up something, and can’t always write it down immediately because my hands are dirty or occupied. Then I would forget.

With the Echo, I can keep my grocery list on there, and tell Alexa to add things for me. For example, I can be making dinner, and just say, “Alexa, add lemon juice to the shopping list” and it’s done. Then when I go to make my grocery list, I just pull up the list in the app and add those things to my paper list. It can also be used while at the store because there is an option to check mark items. We just usually have so much on the list that it’s easier for me to have a paper list that’s more organized.

Now and then we get some very odd items on the list such as “bubble quits” the other day. Tyler has learned that he can talk to the Echo and most of the time it can understand him pretty well. Luckily, it also saves a sound clip so we can listen to it and see what he said. In this case, he was trying to add strawberries to the shopping list!

With almost every recipe I make, I need a timer. And every now and then, I need more than one timer. I can use the timer on the microwave, but again, I have to have a free/clean hand to do this. Since the Echo is voice-activated, I can ask Alexa to set a timer for me, and also tell her to turn off the timer when it goes off. Again, I have a timer in the kitchen, but this one doesn’t require having to push any buttons and possibly getting it dirty.

And it also serves as a timer for anything else we need, such as telling the boys they have until the timer goes off until we get ready for bed, or when they go to time out, or for anything.

I’ll be the first to admit that I am horrible with conversions. I never remember how many cups in a pint, pints in a quart, quarts in a gallon…. is that even the right order? I love math, and I love numbers, but for some reason, this conversion has always eluded me. So, in comes the Echo. I can ask, “Alexa, how many pints are in a gallon?” and she will search the internet and respond, “There are 8 pints in a gallon.” As I’ve mentioned, the voice activation is one of the best parts. If I am in the middle of cooking and need a conversion, I can just ask. I don’t have to stop what I’m doing; I don’t have to wash my hands to grab my phone.

Add Skills to the Echo to Expand it’s Use

Ok, this isn’t directly related to cooking, but I enjoy listening to music while I am working in the kitchen. Since we have an Amazon Prime account, we have access to the Prime Music library, which is an excellent variety of music. I can ask the Echo to play some country music, and it will play a top country playlist for me. Or I can ask for a specific artist, such as “Alexa, play music by Chris Young” and it will shuffle all his music.

I use this both when I am cooking, and when I am cleaning. Although, when cleaning I typically put on my Spotify playlist for cleaning because it is more upbeat songs to keep me going.