Treacle tarts are one of Harry Potter’s favorite desserts, and after making these easy vegan tarts at home, they are one of my favorites, too!

Treacle tarts are another Harry Potter food that I hadn’t heard of before and wasn’t sure what they were. One of my friends brought some to our Harry Potter Club one month. I didn’t know what to think at first, but they were delicious! And, even better, they are vegan!

A moment later the desserts appeared. Blocks of ice cream in every flavor you could think of, apple pies, treacle tarts, chocolate éclairs and jam doughnuts, trifle, strawberries, Jell-O, rice pudding…
As Harry helped himself to a treacle tart, the talk turned to their families.

Harry was too used to their bickering to bother trying to reconcile them; he felt it was a better use of his time to eat his way steadily through his steak-and-kidney pie, then a large plateful of his favorite treacle tart.

-Harry Potter and the Order of the Phoenix

They chose the one nearest a gold-colored cauldron that was emitting one of the most seductive scents Harry had ever inhaled: Somehow it reminded him simultaneously of treacle tart, the woody smell of a broomstick handle, and something flowery he thought he might have smelled at the Burrow.

Treacle tarts seem to be one of Harry Potter’s favorite desserts. After trying these, I understand why! They are the perfect amount of pastry with a sweet filling. And if you make them as mini tarts, as I did, one of them is the ideal size for a quick snack.

When my friend brought them over, and we all devoured them, I knew I had to make them again to add to the blog. She used the recipe found here, and I followed pretty close to that as well.

Just as with the treacle fudge, this recipe uses golden syrup. Some larger grocery stores may carry it in their international foods section, or you can buy it here on Amazon which is what I did. My small local grocery store didn’t have any and one bottle was enough for both treats.

To make treacle tarts, preheat the oven to 350F and line a mini-muffin pan with baking liners or grease it well with coconut oil.

In a large bowl, whisk the flour, sugar, and salt until mixed well.

Add the coconut oil and cut in with a pastry blender or two butterknives. Mix in three tablespoons of water and check the dough consistency. If it doesn’t stick together, add one more tablespoon at a time until the dough holds. Roll the dough into a ball and cover the bowl. Refrigerate the dough for about 30 minutes.

Once the dough is chilled get a tablespoon of dough. Press it into the bottom and sides of each opening on the muffin pan. Bake the crusts for about 10 minutes as they are, without any filling, then remove from the oven.

Meanwhile, use a blender to make the oats into an oat powder (I like to use my immersion blender for this). Zest a fresh lemon, then juice the lemon to get three tablespoons of lemon juice. It’s easier to zest the lemon before you cut it to get the juice.

Mix the oats, lemon zest, and lemon juice in a medium bowl with the golden syrup.

Let the crusts cool, then add about one tablespoon of filling to each tart. You don’t want them to overflow so adjust the amount accordingly.

Bake for another 10-15 minutes. The filling will be mostly set. Let cool before serving. 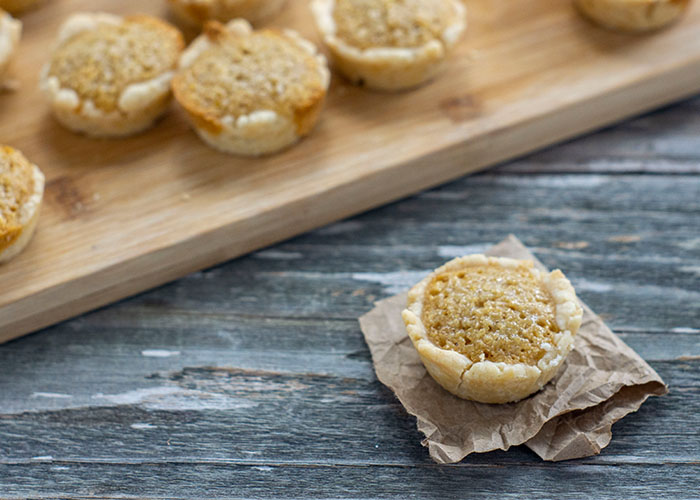