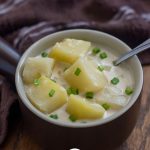 One of my favorite soups at Panera Bread is the potato soup. I decided to use a copy-cat recipe I found as a starting point. From there I changed things to fit our tastes. It’s not perfect, but it’s still delicious! A perfect Potato and Cream Cheese Soup that is great for those cool-weather nights.

And the best part… this is made using just one pot and about 30 minutes. One-pot means very little clean up afterward! My little kitchen helper, Tyler, had a great time with this recipe. He was so proud of himself! I let him use a knife for the first time (don’t worry, it was only a butter knife!).

Adding the cream cheese to the soup gives it a creamy texture. It helps make the entire soup smooth. I like using chicken broth for the soup because of the added flavor, but it can be made vegetarian by using vegetable broth. I’ve done both and either one works well. It just depends on what flavor you prefer.

Start off by cutting your potatoes into about one-inch cubes. The first time I made this, I used a 5lb bag of potatoes on accident, and it was way too many. It came out almost like mashed potatoes. Which, while delicious, wasn’t quite the soup we were looking for.

Add the potatoes and the chicken broth to a large stockpot.

Add in all of your seasonings and bring to a boil over medium heat. Cook until the potatoes are tender, about 15-20 minutes, stirring occasionally.

Reduce the heat to low once the potatoes can be easily pierced with a fork. Cut your cream cheese into chunks (so it melts quicker) and add it to the soup.

Stir frequently with the pot over low heat until the cheese is melted and combined in the soup. Serve the Potato and Cream Cheese Soup warm and garnish with sliced green onion if desired. 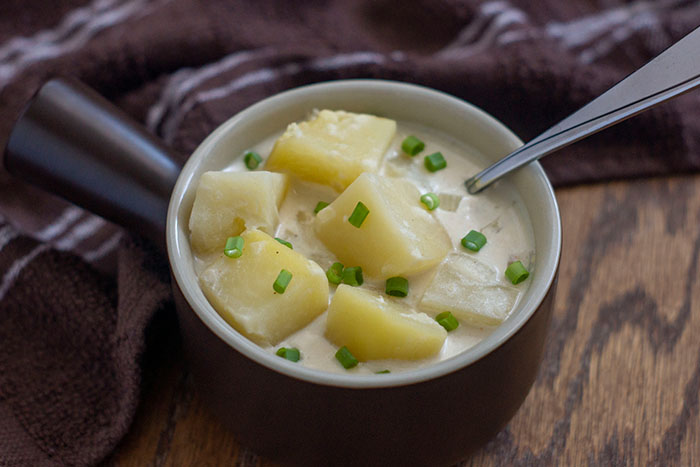