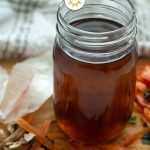 Making vegetable broth at home is easy to make in the slow cooker and costs almost nothing if you use vegetable scraps from previous meals.

If you make any recipes with vegetable broth, then you’ll notice that it can get expensive to keep buying it. Not to mention the cans that are then wasted. Plus, there are a few questionable ingredients that I would rather not have if possible:

Why is there sugar in everything we eat? And if this is vegetable broth, shouldn’t the vegetables be all the “natural flavoring” that we need?

A few months ago, I decided to set out on making my own vegetable broth at home. Any time we cut up vegetables, I would save the scraps and put them in a ziptop bag in the freezer. This included the root sides of onions, garlic peels, pepper stems, carrot peels, celery tops, etc. The amount of each will change the flavor slightly, but you want a variety of vegetables. I would suggest not using potato peels or similar because they will make the broth very starchy.

This is a perfect way to use up the scraps from the kitchen, especially if you don’t have a compost bin. Just continue to add to the bag in the freezer until the bag is mostly full. Some weeks I added a lot to it, others I didn’t cook as much. It took me about 3 months to have enough scraps for a batch of broth.

In addition to vegetable scraps, you can also throw in the scraps or leftovers of some herbs, too. I wouldn’t use anything strong, like mint, but you can easily throw in any parsley, oregano, basil, and other similar herbs.

The vegetable broth takes about a day to make. So you want to make sure you do this at least a day before you need it in a recipe. But don’t worry, the slow cooker does all the work for you, so you aren’t cooking for an entire day.

Usually, about a pound of vegetables makes four cups of vegetable broth. When I was ready to make my first batch, I weighed the bag and had just over 2 pounds, so I made 4 cups of broth. Once it was done, I used what I needed for a recipe the next night and froze the rest since we were leaving on vacation. Just make sure you give more headroom than you think you need because I came home to a broken glass container. But luckily only the smallest amount leaked so I was able to salvage most of it.

Preparing the broth couldn’t be any easier. Grab your bag of frozen vegetable scraps, use a kitchen scale to weigh them so you know how much water to use, and dump the vegetables in the slow cooker.

Measure out the water according to the weight of vegetables. Two pounds of vegetables need about four cups of water. Last, add in any seasoning you want, such as a bit of peppercorn, parsley, basil, or bay leaves.

Cover the slow cooker and let it cook on low for 7-8 hours or high for 4-5 hours. LEAVE IT ALONE. Don’t open the lid or you will let out all of the heat. Don’t stir it because that means you opened the lid. It will make the water cloudy as the vegetables break down. Once it has steeped for the right amount of time, open the lid and let it cool just a bit.

Use a fine-mesh strainer over a bowl to separate the broth from the vegetables. Then use a funnel to pour into container. At this point, the vegetables can only be used for compost or thrown in the trash. If you compost them, make sure to add a lot of “browns” since they have been soaking in water. These will add a lot of moisture to your compost, more than vegetables usually do, so that needs to be offset.

Your homemade vegetable broth can be stored in the refrigerator for up to about 5 days. Or it can go in the freezer for a few months. Again, just make sure you leave enough room and remember to move it to the refrigerator to thaw the day before you need to use it. 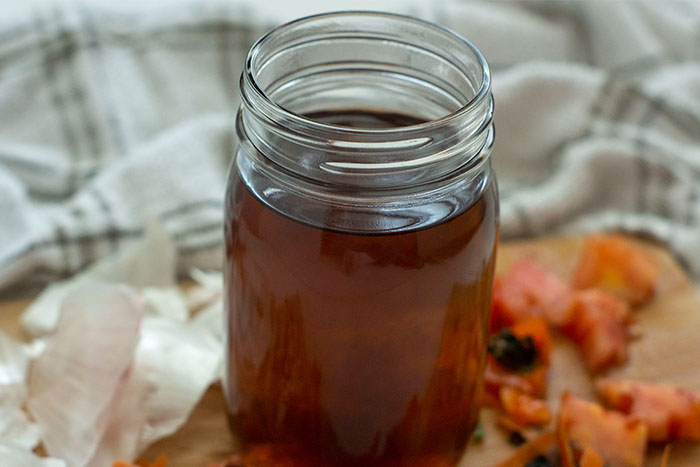