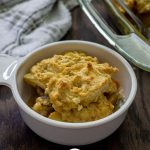 Easily make a pot pie by turning it into a casserole rather than individual servings. This vegan pot pie casserole can be customized to your tastes.

Pot Pies are a great way to make a warm, hearty meal that most people will enjoy. There are so many different ways to make a pot pie, and none are right or wrong. You can make them with or without meat, with specific vegetables depending on the season, and covered with a variety of toppings. You can even make a vegan pot pie!

Over the past year, I have been experimenting with more vegetarian, dairy-free, and vegan recipes. Partly because they are better for our bodies, but also because we have our friends over often who have these dietary restrictions.

I’ve had fun trying to find new recipes, going outside what we normally eat, and learning how to make substitutes. It’s also taught me how many foods have dairy in them that I wouldn’t have considered, as well as how many have animal products. For example, I didn’t know there are anchovies in Worcestershire sauce. And I forgot that marshmallows are made with gelatin which is an animal byproduct.

Ok, back to the recipe… As I was looking around for vegan recipes, I came across this recipe for 1 Hour Fall Pot Pies and it looked promising. Of course, I made some changes to it as I was cooking, but it was based on the recipe overall.

Typically, pot pies are made in individual serving dishes. Well, I only just got some for Christmas that can go in the oven, so I turned this into a pot pie casserole instead. It ended up working really well because we could then vary the serving sizes to the amount we were all hungry for at the time.

I also used different vegetables than suggested, but we went with what we had on hand. This is a great way to use up leftover vegetables if you have them, too, instead of letting them go to waste.

Also, since this became a casserole, I didn’t need to make individual biscuits for the top. I made a large bowl of the biscuit mixture and spread it out as much as possible over the casserole. It baked as one large biscuit that we then cut into when serving the meal.

Preheat the oven to 425F. In a large saucepan, heat the olive oil over medium-high heat. Add the chopped onion, garlic, and a pinch of salt and pepper. Sauté for about 7-10 minutes, until the onions are soft.

Whisk the flour into the vegetables.

Slowly whisk the vegetable broth and almond milk into the pan. The almond milk is optional, but we felt it helped make the mixture more creamy.

Add in the vegetables that you plan to use and the thyme. We made it with potatoes and carrots the first time but added kale the second. It was yummy both with and without the kale, it just depends on the texture you prefer.

Simmer until the mixture starts to thicken, which is usually about 10 minutes.

Meanwhile, prepare the biscuits by combining the melted butter and almond milk to make a vegan substitute for buttermilk.

In a large mixing bowl, whisk the flour, baking powder, baking soda, and salt together.

Add the cold vegan butter and cut it into the mixture. You can use a pastry blender or your hands to work the butter into the flour mixture until it is crumbly and has the consistency of sand.

Slowly pour the “buttermilk” into the bowl while stirring. The mixture will still be sticky.

Once the pot pie filling has thickened, pour it into a 9×13 glass dish.

Spread the biscuit mixture over the filling in the dish. It may not cover the entire thing, but it will spread as it cooks.

Bake for about 15 minutes, until the biscuit is golden brown on top and the filling is bubbly. 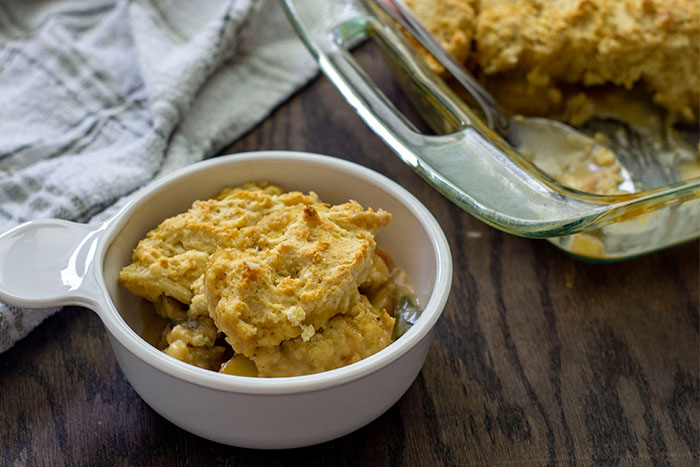