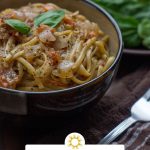 Pasta All-In is a one-pan meal (hence the name) that is so easy to make and doesn’t take long at all.

Pasta All-In started from a recipe that I saw someone share on Facebook, one of those many recipe videos that are floating around every day. There wasn’t a title, and it didn’t link to a blog post. It was just a video without words or anything else. I tried to look at what was going in and went from there.

The recipe is so easy because it’s all cooked in one pan, hence the name ‘pasta all-in’. The recipe video didn’t have a name for it, so I made my own.

This recipe generally makes enough for 4 people, so I usually halve the recipe for us. It can be reheated, but for some reason, it’s one of those that we just don’t end up eating. So I have started making just enough for dinner that night unless we have people over.

Speaking of, it’s a great recipe if you are having company because it’s quick and easy and doesn’t take a lot of work. Put everything in the pot, let it cook, then serve.

Also, sometimes I don’t have enough vegetable broth so I’ve made it with chicken broth and it is just as good! This is a great meatless option and can be vegan if you use vegan cheese.

You’ll need a large stockpot to make Pasta All-In since you are adding all of the ingredients into one pot. Cut up the vegetables and throw those in the pot along with the linguine, tomatoes, seasonings, and broth.

If the pot isn’t tall enough, you may need to break the linguine in half for it to fit. Otherwise, you can also wait until the linguine cooks a bit so it gets soft and will fit in the pot.

Once you are able, cover the pot with the lid and bring everything to a boil.  Turn the heat down and let it simmer while keeping the lid on and cook for about 10 minutes or until most of the liquid has evaporated.

Serve the pasta warm and garnish with parmesan cheese. 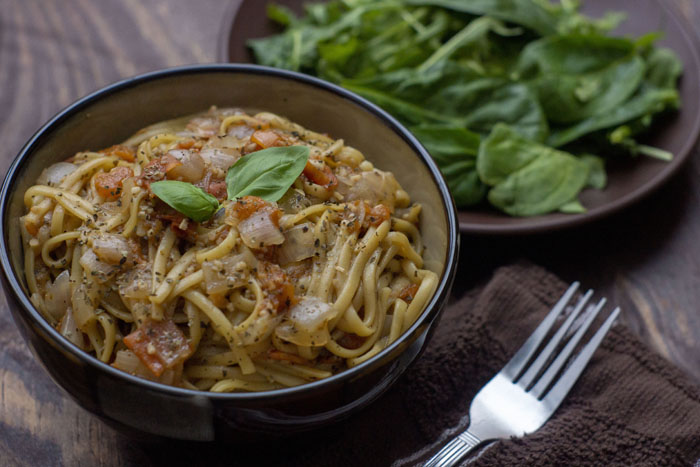