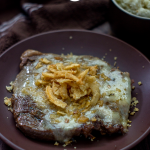 French Onion Steak is an easy one-pan meal for steak with a unique flavor: cooked in broth and topped with cheddar cheese, onion soup mix, and fried onions.

Ever have those recipes that you make, love, then somehow forget about it? Yeah, this was one of those meals. The first time we made French Onion Steak, we both really enjoyed the meal.

Then, as time went on, for one reason or another, we both forgot about it. Not that it was a forgettable meal. But, when Justin said he wanted some type of steak for dinner, I started looking through my recipes and found this one again.

I believe this recipe came from one of the recipe card spinners that you can sometimes find at Publix. Or it may have even been one of the meals that they were cooking in-store to give samples. Either way, I know it was from Publix. And it’s funny, until moving out of Publix territory, I never knew it was possible to miss a grocery store!

I am not big on steaks, so we don’t have it very often. It’s also too chewy for the boys to eat right now. So when we do have it, Justin eats his entire steak! No leftovers for lunch the next day. I couldn’t even eat half of mine and saved the rest for later, but he ate it all!

The French Onion Steak recipe is pretty easy to make and doesn’t require too many ingredients either. Depending on how cooked you like your steak determines how long this recipe takes to make. Justin likes his steak cooked medium, so I took his off the pan and let mine cook a few minutes more. I like it cooked closer to medium-well. But that’s what’s great about this meal. I can customize it to how we each like it. And the broth is really good with some mashed potatoes as a side.

I always cook this meal on the stovetop, but you could probably change it to be able to grill. We haven’t tried that yet, but if we did I would do a few things different. Instead of cooking the broth, I would use the broth as a marinade and let the steaks sit in that for a couple hours. When it comes time to grill, I would use the onion soup mix as a rub for the steak. And maybe sprinkle more on while it cooks. Then, once the steaks are cooked, you could top it with the cheese and french fried onions.

Preheat a large sauté pan over medium heat. While it warms up, coat each side of the steaks with olive oil and the dry onion soup mix. Place the steaks in the pan and cook for about 2-3 minutes on each side, just until they start to brown and are almost cooked to your desired doneness.

Add the beef broth to the pan and cook for another 5 minutes. Stir the broth occasionally and let it thicken in the pan.

Top the steaks with the cheddar cheese and cover the pan.

Cook until the cheese melts, about 3 minutes. Remove the steaks from the pan and top with the fried onions. Serve warm with the juice from the pan. 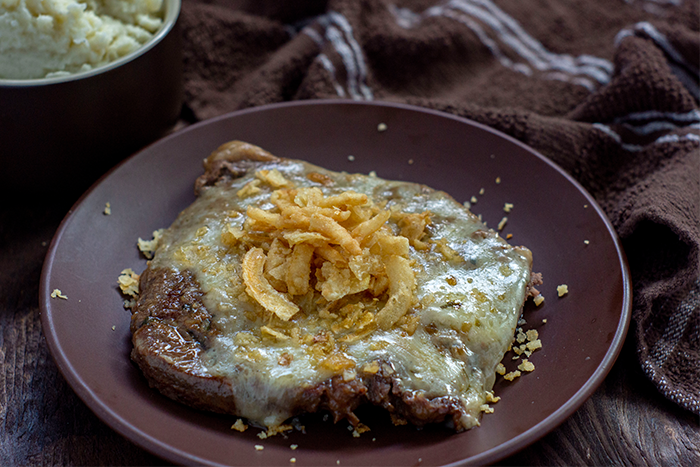