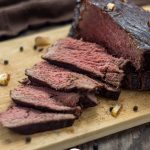 No Hogwarts Feast is complete without a hearty, juicy roast beef after a day full of magical learning. This recipe is simple yet delicious!

Before trying this recipe, I had never eaten roast beef made in this way. Growing up, we didn’t eat a lot of beef because my mom refuses (the bloodiness grosses her out). I wanted to make a roast beef dinner as the main meal for one of our monthly Harry Potter Club get-togethers. I had to do some searching online for this one.

Harry’s mouth fell open. The dishes in front of him were now piled with food. He had never seen so many things he liked to eat on one table: roast beef, roast chicken, pork chops and lamb chops, sausages, bacon and steak, boiled potatoes, roast potatoes, fries, Yorkshire pudding, peas, carrots, gravy, ketchup, and, for some strange reason, peppermint humbugs.
-Harry Potter and the Sorcerer’s Stone

“Must be nice,” Ron said abruptly, when they had sat down and started serving themselves roast beef and Yorkshire puddings.
-Harry Potter and the Goblet of Fire

Of course, as with anything, there are many variations of the same recipe. Some required cooking all day long, and that just wasn’t going to happen in the Houston heat. Other recipes were very complicated. Especially for someone who’s never worked with this meat before except throwing it in the slow cooker. Then I found this recipe, and it looked easy enough.

The original recipe suggests choosing a cut of meat with a layer of fat on it, but I can’t stand fat on meat when I cook or eat. So I got the leanest one I could find. Of course, with rump roast, there aren’t any that are super-lean. So it still had a decent amount of fat to give the meat flavor.

The day before you want to make this roast beef, put the meat in the refrigerator to thaw. Then one hour before cooking, remove the meat from the refrigerator and set it out on the counter, covered, to let it come close to room temperature. You want the entire cut the same temperature. This allows the meat to cook more evenly. Sprinkle some salt on the meat while it sets.

Preheat the oven to 375F. Uncover the roast and pat it dry, then use a sharp knife to make a few slits in the meat. Slice the garlic cloves into a few pieces and stick those into the slits in the meat. Rub the meat with olive oil and season with some salt and pepper.

Place the entire thing on the middle oven rack with a pan below to catch the drippings. This is the first time I’ve ever cooked anything on the rack directly. I even cook my pizza on a stone. Start the roast at 375F for the first 30 minutes to brown the outside. Then lower the heat to 225F and cook another 1.5-2.5 hours. You want the meat to reach an internal temperature of 135F.

Take the roast out of the oven and place it on a plate and form a tent with a piece of aluminum foil to keep it warm while the roast beef rests for 20-30 minutes. Some of the juices may leak, so make sure it is on something with sides. 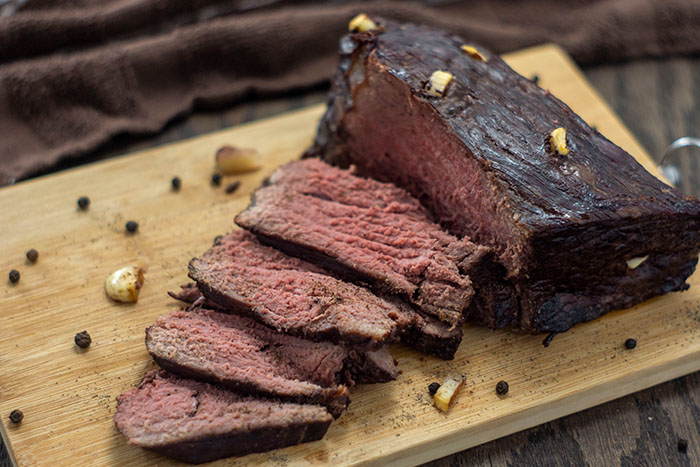