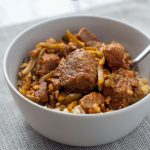 Kansas City Steak Strips combines steak in a chili sauce/broth mixture with green beans, all served over a bed of cooked rice.

Kansas City Steak Strips is a recipe that my dad used to make it all the time when I was growing up. Although he and I were the only two who ate it. My mom and sister don’t eat steak. Or at least I know my mom doesn’t. I don’t know exactly why my sister didn’t eat it. Anyways, more for us!

When I started making this, I could never remember the recipe and had to call my dad every. single. time. I finally wrote down the recipe two years later. Just remember the rule of 1’s. There’s 1 of everything: 1 tbsp butter or oil, 1 cup of rice, 1 pound of steak, 1 can of beef broth, 1 bottle of chili sauce, and 1 can of green beans.

Justin asked me one time to make it without the green beans since he doesn’t really like them. So I did. And it just wasn’t the same. So trust me, the green beans are necessary. And even for someone who doesn’t usually eat vegetables, I will eat them in this. It’s one of the only ways I will readily eat green beans. My dad always buys the French Cut beans. I’ve tried those and regular canned green beans and don’t notice a difference.

I believe my dad would usually buy a steak, then cut it into pieces. Or maybe he bought steak strips and still cut those up. Either way, I have found that buying “beef stew” meat works really well. It is already cut into chunks. Plus it isn’t too fatty. I don’t like a lot of fat on meat.

From what we have learned, Kansas City Steak Strips is ok reheated the next day, but past that it doesn’t last long. I try to make only enough for us each to have two bowls: one the night I make it and one for lunch the following day.

We eat this meal often, but always debate whether we want a fork or a spoon. You can use the fork to stab the meat, but it’s hard to scoop the rice with it. Plus, a fork can’t get the sauce. I tend to go with the spoon. But every time we eat it we have to stop and think about which is better! If you make it, let me know which you prefer. Do you use a fork or spoon?

Prepare the rice according to the package.

In a large skillet, warm the oil over medium heat. Sauté the meat until it’s cooked through.

Pour the beef broth and chili sauce to the skillet and bring it to a boil, stirring to combine.

Drain the can of green beans and add those to the skillet.

Serve the meat and sauce over the prepared rice. 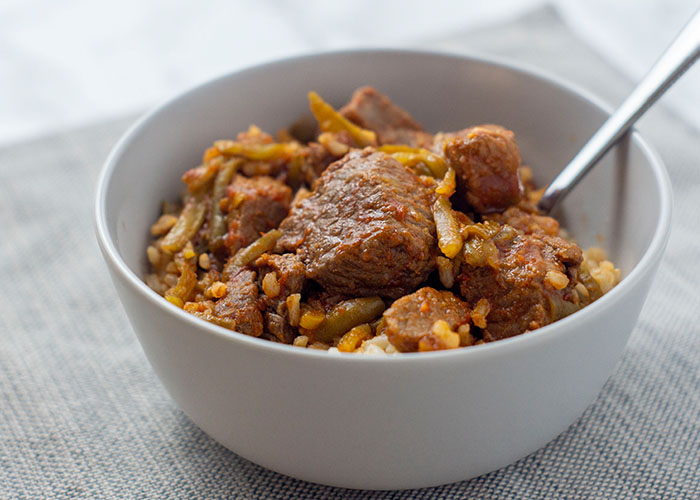