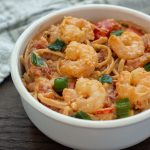 Make this easy, one-pan shrimp pasta recipe with a Cajun flair and creamy sauce that’s sure to satisfy any seafood lover.

Normally, I don’t like a lot of seafood, but shrimp is one of my favorites. Mix that in a pasta with a creamy sauce and I am sold! That’s why I knew this recipe for shrimp pasta would be a winner in our house.

I found the original recipe in one of my cooking magazines and knew we had to give it a try immediately. Most of the ingredients are items we usually have on hand, so we only had to grab a couple of things to make this delicious meal.

The original recipe called for green bell pepper. We decided that a red bell pepper would be better in it. I think we also were forced into that decision because the grocery store was out of green peppers at the time. We made a few changes to the shrimp pasta as we cooked. But, that’s just how I cook. And it gives us a unique dish to share!

Chop the bell pepper and mince the garlic. Then prepare the pasta according to the package. When you drain the pasta, reserve about 1/3 cup of the water.

Heat a large skillet over medium-high heat and add one tablespoon of oil to the pan. Add the bell pepper to the pan and cook for a few minutes until they are crisp-tender.

In a large mixing bowl, combine the Cajun seasoning, flour, and shrimp and toss to coat the shrimp.

Add the shrimp. Cook for another 2-3 minutes until they are done. Make sure to flip the shrimp at least once while cooking.

Put the remaining oil in the skillet and add the cayenne and minced garlic. Then stir in the liquid reserved from the pasta.

Mix in the salt, bay leaves, and tomatoes. Bring the mixture to a boil. Reduce heat and simmer for 5 minutes.

Discard the bay leaves and add the half-and-half, cooking until heated through. 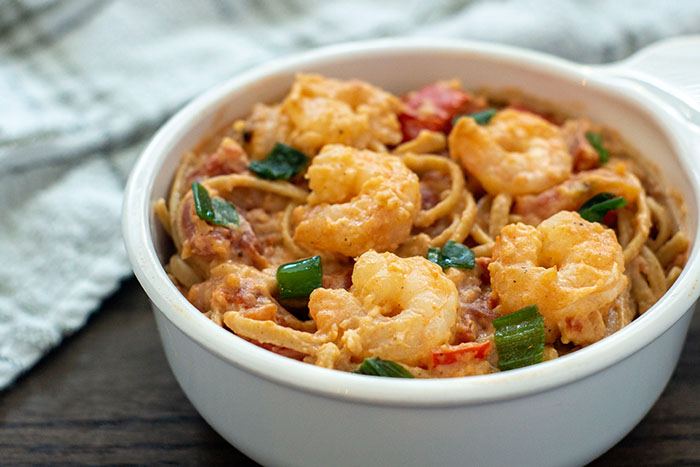