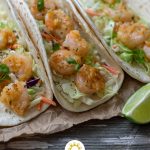 It seems like an odd combination, but adding some homemade coleslaw to shrimp tacos makes a delicious and light weeknight meal!

A few weeks ago we bought the ingredients to make some homemade coleslaw, and it was delicious! After that, we were all in the mood for other recipes that used a coleslaw, so decided to think of something else to use a few ingredients that were leftover from other meals. There was about half of a cabbage in the refrigerator, some shrimp in the freezer, and a couple of corn tortillas left in the pantry. So if you put that together, you get shrimp tacos with coleslaw!

Yes, I know it sounds like an odd combination, but stick with me here for a minute.

This recipe includes making a cabbage and carrot slaw to go with the tacos. You’ll also need to bread and fry the shrimp before adding them to your taco shell. We used the new cast iron skillet that I received as a gift a few months ago for the shrimp. I’m still learning how to use the skillet, but so far it’s been great!

If you don’t want to make your own coleslaw or need to save time, you can buy it packaged. We have now done it both ways. There are advantages to each method. Last time, when I used a bag of slaw, I added the dressing mixture from the recipe. Bagged coleslaw is usually very dry. For the shrimp tacos, it helps to have one with dressing to add flavor.

Start making the coleslaw by shredding or thinly slicing the cabbage and adding it to a large mixing bowl.

Add the shredded carrots, and green onion. In a small bowl combine the garlic, lime juice, mayonnaise, honey, salt, and pepper. Pour this mix over the cabbage and toss to combine it all together.

Place the coleslaw in the refrigerator (letting it sit while you cook the rest helps infuse the flavors) while you prepare the shrimp.

In a small mixing bowl, combine the flour, salt, pepper, and paprika. Dredge each shrimp in the flour mixture until it is coated.

Heat your skillet over medium-high heat and fill with the oil to coat the bottom. Once it’s warm, add the shrimp in a single layer and cook for a few minutes on each side until they are cooked through.

While the shrimp is cooking, heat the tortillas according to the package directions. To build your tacos, place a tortilla on the plate, then top with coleslaw followed by a few pieces of shrimp. Garnish with cilantro and a splash of lime juice as desired. 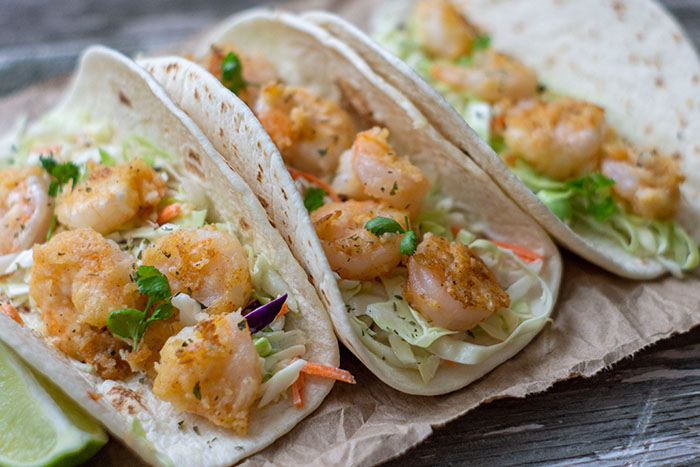 48 thoughts on “Shrimp Tacos with Coleslaw”