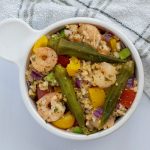 Combine shrimp and okra with some fresh vegetables and serve over a bed of rice for this delicious take on a shrimp gumbo.

If you’ve seen any of my 2017 garden posts, then you may have noticed our overabundance of okra. I found a photo of a shrimp and okra bowl and decided we could try to make it ourselves. We started cooking to see what we could come up with since I didn’t have a recipe. This is great because it’s basically a one-pan meal as well, besides cooking the rice to put the gumbo over.

We have so much okra out in the garden, so I sent Justin out to get the okra for the recipe. I don’t like going out there in the summer (and whatever the calendar says, it’s summer in South Texas) because there are always a lot of wasps out there and I am terrified of wasps. So during the warm months when the wasps are most active, I don’t do much in the garden. I don’t even go in the backyard much because of the wasps and the heat.

Start by preheating the broiler in the oven. Line a baking sheet with foil to make cleanup quicker and easier. In a small mixing bowl, combine 1 tablespoon of oil, the cornmeal, and sliced okra stirring to coat the okra. I learned okra should be about 3-4 inches for optimal taste. When they get longer, they get stringy and lose a lot of their flavor.

Put the bell pepper halves and okra on the lined baking sheet with the skin side up. Broil for about 10 minutes. The original recipe had a red bell pepper in it, but we had trouble finding one at that time. We decided to use a yellow pepper and it still turned out delicious.

After 10 minutes, cover the bell pepper. Let it sit for another 10 minutes to let it continue to cook by steaming in the bowl. Then chop the pepper into bite-sized pieces.

In a medium-sized mixing bowl, combine the honey and creole seasoning then coat the shrimp. I prefer to go ahead and take the tail off the shrimp before cooking. It’s easier to eat later if the tails are off.

Put the shrimp on the baking sheet with the okra. Put it back under the broiler for another 8-10 minutes flipping the shrimp halfway through.

Divide the food into four serving dishes and serve warm. 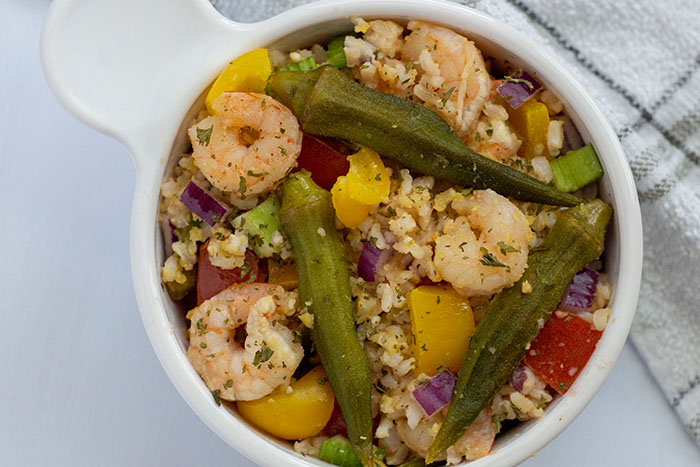 48 thoughts on “Shrimp and Okra Bowl”