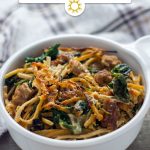 Combine the hearty flavors of sausage and spinach with pasta and cheese to make a yummy Sausage and Spinach Spaghetti Pie that’ll leave your family begging for more!

I’ve had to get creative with recipes including sausage lately. That’s why we decided to try out Sausage and Spinach Spaghetti Pie. We suddenly have a few pounds of it in the freezer! It’s not something I typically buy, but there is a story behind all this extra sausage.

So one night, Justin comes home from a meeting, and I ask how it went, as usual. He proceeds to tell me about the meeting and ends with, “Oh, and I also got 3 pounds of homemade sausage.” My first thought, “Um…. what?!” One of the guys in his networking group has a family tradition of making homemade sausage every year for the holidays. Initially, it was a small family thing. They would give a bit away to close friends. Over time, more and more people learned about the tradition and wanted to purchase some of their sausages. It has grown so much that, this past year, they made over 400 pounds of Italian sausage! He was selling it to anyone at the meeting who wanted some, so Justin bought two pounds of regular sausage and one pound of spicy.

I found this recipe in the Cooking Light magazine, and we thought it sounded yummy. And it was a great way to use up some of this sausage. The sausage and spinach spaghetti pie is also a great meal to make on a budget since there aren’t any expensive ingredients. Plus it makes enough for leftovers the next day.

We changed a few things in the original recipe to make it our own. The recipe says to start by placing an 8-inch round cake pan in the oven while it preheats to 500 degrees. I’ve never heated a pan on its own before. And I’ve never used the oven at this high of a temperature, so it was all new for me. I also found the 8-inch wasn’t big enough. This needs a 9-inch round pan.

Place a 9-inch round baking pan in the oven. Set the temperature to 500F so the pan warms with the oven.

Cook the pasta as directed. Then drain and mix it in a large bowl with eggs and toss to coat.

Meanwhile, in a large skillet, heat the olive oil over medium-high heat. Add the sausage. Cook for a few minutes until the sausage is done. I find it easiest to either use your hands to break up the sausage before adding it to the pan or use the kitchen shears to cut it into bite-sized pieces.

Add the tomato, onion, and spinach. Cook this for about 7-10 minutes. The liquid should mostly evaporate and the spinach wilted.

Combine the sausage with the pasta mixture in the large bowl.

Add salt and pepper as well as 1/2 cup of Italian blend cheese. Stir it all together until it is mixed well.

Carefully remove the cake pan from the oven and spray with cooking spray. Fill the pan with the sausage and pasta mixture and top with the remaining 1/4 cup of cheese (or more if you are like me and like a lot of cheese).

Bake for about 5-10 minutes at 500F. The cheese should be melted and start to brown. Cut into wedges to serve. 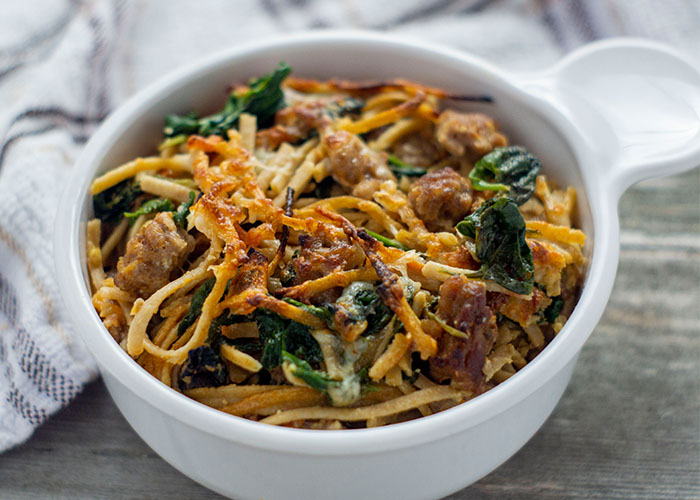 41 thoughts on “Warm and Hearty Sausage and Spinach Spaghetti Pie”