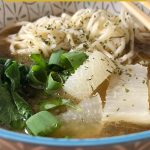 The Most Delish is a meal kit that makes authentic Asian cooking approachable and fun through role-based instructions and unique flavors.

Note: This is a sponsored post written by me on behalf of The Most Delish. I was given a free meal kit in return for an honest review. The opinions and text are all mine.

A few weeks ago, another blogging mom that I have been following for about a year reached out to me on behalf of a new endeavor she and her husband have started called The Most Delish. The Most Delish specializes in meal kits to make authentic Asian comfort foods.

But it’s more than just a box with food and a recipe. The Most Delish is an entire experience on its own! I was so excited when the box came. Everything looks very professional and is easy to read through and know what each item is. I didn’t notice at first, but it’s even color-coded to make the prep quicker and easier.

The first thing I did upon receiving my box in the mail was to look through everything. I wanted to get an idea of how long it would take to prepare the meal and what came in the box versus what I would need to purchase at the grocery store.

About The Most Delish Meal

All of the ingredients that come with The Most Delish meal kit are all clean, natural ingredients with no MSG.

The iconic national dish of Taiwan, Beef Noodle Soup is flagrant, nutrient-dense and addictively delicious. Taiwanese beef noodle soup is a miso-based ramen with layered depths of umami notes and health benefits. A key ingredient, fermented broad bean paste, contains an abundance of active probiotics that is great for your digestive health and immune system. A nutritious bone broth soup base that is low in fat, rich in protein, gelatin, and collagen provide benefits for your joints, skin, and hair. This bowl is a slurp of health and delish.
-themostdelish.com It was nice to have the shopping list with each item and the amounts listed. It also designates which ingredients can be swapped with others, and which are optional. For the purposes of this review, I stuck exactly to the list.

For the most part, all of the items were easy to find. I typically shop at the Neighborhood Walmart that is only a mile up the street from me, but I ended up having to also run to HEB to get one last ingredient that Walmart didn’t carry, which was a daikon. I hadn’t ever even heard of a daikon before and had to look it up online.

The other ingredient I had trouble getting the exact amount of was the meats. It’s suggested to get 1.5 pounds of beef chuck and 0.5 pounds of oxtail. But I could only find them both in packages of 2.25 pounds. I bought those and froze the rest to use for another time.

Overall, I only spent $16.51 for the groceries I needed. This does not include buying any cilantro or scallions from the list because I have those growing in my garden. Although those wouldn’t add much to the bill since they can be found for a fairly cheap price.

The kit is designed to have more than one chef in the kitchen. But at my house, it is oftentimes just me cooking, so I had to adjust for that when I prepped the meal. There are 4 “roles” included: the Prep Chef, the Spice Chef, the Broth Chef, and the Plate Chef. At some points they would all be working in the kitchen at the same time. At others, only one would be busy.

I started by laying out all four of the “chef” directions and separating which ingredients are used for each role. Since I was doing this myself, I needed to keep organized.

It helps that the kit comes with a card that tells the order that each task for the roles needs to be done and in what time. I used that to go down the list and do everything needed in order.

After doing this on my own, I can definitely see the advantage of having more than one person in the kitchen. Justin was able to help me for a few minutes, but he was keeping the kids occupied while I cooked which was also a help. If the boys were older, then I would have had their help. I think most kids would be able to take on the Plate Chef role by the time they are around 8-10 years old.

There were one or two places I took a shortcut, especially since I was cooking by myself. For example, the recipe calls for two entire bulbs of garlic (I originally thought cloves until I read into it, luckily I always have a lot of garlic in the house) and each clove needed to be peeled. That was way too much peeling for someone who despises peeling garlic. So, I used my garlic press and went with minced garlic instead.

Overall, the instructions were very easy to follow and I was able to make the meal in only a few minutes more than the suggested time. If I had others helping, we could have easily done the prep work in the 30 minutes the recipe says it takes. Then it’s just a matter of letting the soup simmer for 2 hours. It seemed like a long time, but the broth was so full of flavor that it was worth it!

While it was cooking, Justin commented on how amazing the whole house smelled because of the unique blend of spices that are not ones I normally use.

Justin and I both had a bowl of this as soon as it was ready. The first thing we both said was that it was very different than anything else we’ve ever made before and that was a good thing! I wasn’t so sure about the daikon because it honestly had a funny smell when I was cutting it up. But it was just the right amount of crunch added to the soup.

We both ended up tearing up the bok choy before adding it to the soup so it would be easier to pick up. We topped ours with both the cilantro and green onions. Again, we wanted to make this as close to the recipe as possible since we were giving it our honest review. It’s hard to review something if you don’t make it properly!

The Beef Noodle Soup from The Most Delish definitely lived up to its name of being delicious! Making the meal on my own was a lot of work, and it created a lot of dishes. But I still had fun with the experience. I’ve never made a bone broth before and had no idea what to expect. The seasonings used added so much unique flavor to the meal, and the ingredients that came in the box were perfectly portioned.

We made the 4-serving box, but it will probably make closer to 6 servings here since we don’t eat large portions of food. And even better, it reheats pretty well. Since there were leftovers, I kept all of the toppings in their own containers and strained some of the broth and meat into one as well. I was able to reheat the broth on the stovetop and add the noodles to that to warm them for a second meal the next day.

If you want to try some amazing, delicious, authentic Asian food for yourself, you can check out their website at www.themostdelish.com and order your own meal kit! There are options for a 4-bowl kit and an 8-bowl kit. This would be fun as a get-together with friends or other couples to work together on a meal then have game night while waiting for the soup to simmer. Boxes come in either original (the one I made) or a spicy version and can be shipped worldwide.

Check out more on their Instagram @themostdelish as well for images of the mouth-watering recipes.

15 thoughts on “The Most Delish Meal Kit Review”