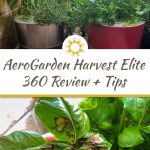 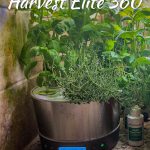 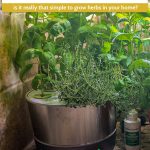 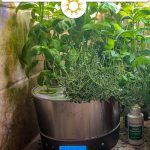 Having the AeroGarden Harvest Elite 360 has been wonderful in the kitchen. We always have fresh herbs available with very little maintenance.

Now that we’ve had our AeroGarden Harvest Elite 360 for about 6 months, I feel like it’s time to do a review. Back in March, when everything started shutting down due to the COVID pandemic, we bought an AeroGarden to grow our own herbs.

A few years ago, I tried growing a bunch of herbs outside in our backyard garden. They did great until about May when it started getting too hot in the Houston area for the herbs. All of them died within a week or two.

The following year, I tried doing an indoor herb garden. I used a bunch of empty glass jars, put some rocks at the bottom, filled them with soil, and added seeds. Those sat on a windowsill in the living room and they did decent there. This herb garden lasted longer than the outdoor one. But, eventually, those plants died off as well. I’m not sure if they were overwatered or didn’t have enough sun or a combination of the two.

This year, we weren’t going to do much of a garden. Then, in March, COVID changed everything. For Ryan’s birthday, he was sent a bunch of seeds from a gardening group and we planted those in the backyard garden. Around this time, we also decided to invest in an AeroGarden. Some of our good friends have had one for a while, and showed it to us when we were there a few months prior to this. When we decided to plant our own food again, the idea of an herb garden came up. Since we’d not had much success before, we thought we would give the AeroGarden a try.

The first thing we did was go to the AeroGarden website. After looking through all of the options, we decided that the AeroGarden Harvest Elite 360 would be the best option for us. It has spots for growing 6 herbs, which was plenty. I like having fresh herbs when cooking, and they add some nice green garnish to our food photos.

The elite costs just a bit more than the regular harvest 360, but we wanted those few upgrades. It has a visual counter for the number of days that the garden has been growing as well as when it needs food again.

The elite version also has a menu, and you can set the clock on the machine. This allows you to set up the light timer to be at a consistent time every day.

Setting Up the AeroGarden

The AeroGarden Harvest Elite 360 comes with a great set of directions. It was very easy to get the entire thing set up. I only spent about 15-20 minutes from unpacking the machine to having it ready to go on the counter. The machine has a water reservoir that needs to be filled. Plug in the power cord for the pump. Place the seed pods in. Plug in the machine. Set the time and type of garden you are doing. That’s it!

The machine does the rest of the work. As plants start to grow, you will need to adjust the height of the light to accommodate the growing plants. Every two weeks you’ll need to add some plant food. And the machine will tell you when it’s low on water.

The most important thing is to follow the machine on when to feed the plants and add water. For the most part, the AeroGarden does the rest of the work. But there are a few things you can do to keep the garden growing healthily.

Eventually, you will have your light at the highest setting. Once this happens, you need to make sure your plants don’t get too close that they touch the lights for long. When that happens, it will start to burn the tops of the leaves. Our AeroGarden is in the kitchen (since I use it often for food) and there are times that I walk into the kitchen and can smell the herbs. Usually, that’s a sure sign that one of them is too tall and it’s actually cooking under the light and giving off a scent.

When you trim the plants, don’t trim too low. We’ve learned that it’s best to only cut off a small amount at once. If you cut it down too low, the plant doesn’t always recover.

If you end up needing to trim more than you can use, there are a few things you can do to use them up. I will sometimes put them in the refrigerator if I know it will be used within a day or two. Past that, they tend to wilt in the refrigerator.

You can dehydrate the herbs, then crush and save in a container. This can be used in recipes the same way you would use the dried herbs purchased from the store.

For other ways to use herbs, see this post about 11 Ways to Use Fresh Herbs.

One thing I hadn’t thought of at first was the root system. They can get crazy and out of control! When you open the compartment to add the water, take a quick glance at the root system. This won’t be an issue while the plants are small. But as they grow, the roots grow, too.

I find that the mint seems to have the largest roots and grow the quickest. The mint will take over if you aren’t careful with it.

When the roots start to get too big, I like to trim them back. The easiest way to do this is to turn off the machine by unplugging it from the wall. Yes, you’ll need to reset the clock, but I don’t play around when it comes to water and electricity (electrician’s daughter here!). Carefully lift the entire plate with the seed pods and plants up as far as you can. Use a pair of kitchen shears or garden shears to trim back some of the roots. Remember, the seeds started in plastic pods, so you don’t want to cut through those.

Make sure you don’t trim too much, as it can damage the plants. Either way, you may have a day or two that the plants don’t look great, but they will bounce back. Mine always have and the first time I cut almost all of the roots.

Throw the roots in a compost bin if you have one, or in the trash. Then place the plant plate back on the machine and plug it back in. You’ll likely have to fill it with water since the roots were taking up a lot of space.

When trimming the roots, be careful of the pump and the cords for it. I may have accidentally cut the mesh piece that blocks the roots from getting into the pump before!

This may not be an issue for you, depending on where you store your AeroGarden. Ours is in the kitchen which is close to the master bedroom. Our garden light turns on at 5:30am. On most weekdays, we are already up at that time. But on the weekends, we aren’t. We noticed that the light was turning on and pouring into the bedroom. It would either wake me up or keep me awake if I woke up at that time.

To stop that, we bought a cheap piece of black foam board at the grocery store by the school supplies. It doubles as a way to block the light and we sometimes use it when taking food photos.

Where to Purchase & Customer Support

We purchased our AeroGarden Harvest Elite 360 straight from the AeroGarden website. You can find it HERE.

When we ordered in March, they were a bit behind in fulfilling orders. But it looks like they are caught up from that and operating at normal delivery times.

When you order, there are often different colors to choose from. We ordered the stainless steel since we have stainless steel appliances in the kitchen. It matches really well in there and looks great on our counter.

You also get to choose which seed pods you want to start with. We bought the herb kit since that’s what we wanted the AeroGarden for. It came with Genovese Basil, Curly Parsley, Thai Basil, Dill, Thyme, and Mint.

There are a variety of other seed kits. You can also create your own custom seed kit. Many of these weren’t available when we were ordering, so now I am excited about trying something else in the AeroGarden at some point.

You can view all of the seed kits HERE.

As I mentioned, we ordered the stainless steel AeroGarden Harvest Elite 360. When it came in, I opened the box to an orange AeroGarden Harvest 360. Not only was it the wrong color, but also the wrong product. It took us a bit of time to get in contact with AeroGarden to get this fixed. I tried calling, but they didn’t have anyone answering phones due to COVID. Then I tried emailing and received no response. I was getting frustrated, so Justin reached out on their Facebook page. They answered him pretty quickly there and got everything fixed for us. In addition to getting that corrected, they also sent us a free seed pot kit for our troubles.

Their seed pods have a guarantee. Each has a different time frame for sprouting, and it’s written directly on the pod. We had a couple that didn’t sprout. I gave it a few extra days past the timeframe and still nothing. This is when having the elite model came in handy, since it counts the number of days that the garden has been established. On their website, there is a contact form. One of the choices is that the seed pods didn’t germinate or sprout. I filled that out, told them which didn’t, and had a response promptly that they were mailing out new seed pods immediately. Once I planted those, they ended up sprouting in the right amount of time.

Overall, we have been very satisfied with our AeroGarden Harvest Elite 360. It’s very easy to maintain, and the herbs are delicious. The upfront cost can seem like a lot for a garden, but it’s worth it. Especially if you like fresh herbs in your cooking. You always have some growing and ready to be harvested without having to buy more at the store every time.