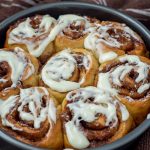 Make breakfast delicious with No Yeast Jumbo Cinnamon Rolls with cream cheese frosting that take less than one hour with no yeast in the dough.

I’ve mentioned before that breakfast is not usually a very exciting meal at our house. It typically consists of cereal, oatmeal, and the occasional scrambled eggs. Sometimes we get adventurous and try something different. We’ve been trying to do “Big Breakfast Sunday” and have a new recipe every Sunday for breakfast. Recently it was No Yeast Jumbo Cinnamon Rolls made from scratch.

Sometimes, when the boys are grocery shopping with Justin, they will convince him to grab a tube of cinnamon rolls for breakfast. Lately, though, we’ve noticed that the quality has been declining in those store-bought cans of cinnamon pastry goodness.

One weekend recently, Tyler asked for cinnamon rolls, but we didn’t have any. I decided we could probably make some that would taste much better than the store-bought, so I started looking up recipes. Almost every one of the required yeast.

Yeast = Rising Time. Rising time meant that it would take a couple of hours for most of the recipes. There are a few different times that the dough needs time to rise. Well, this girl enjoys her sleep, and I was not waking up at oh-dark-thirty just to make some cinnamon rolls.

I started searching for recipe ideas that don’t use yeast. The results were fewer. But I finally found this recipe and had everything we needed already. And it takes less than an hour to make. Yes, that’s a bit longer than popping open a tube and baking, but it’s worth it!

To make the cinnamon rolls, you want to use an 8- or 9-inch round cake pan. Melt about one tablespoon of butter and swirl it around the pan to coat the entire bottom. In a medium bowl, combine the sugar, brown sugar, cinnamon, and salt to make your cinnamon filling.

Add in some vanilla extract and the butter. Use a pastry blender or two butter knives (or your hands) to cut the butter into the cinnamon-sugar mixture and set this aside.

In a large mixing bowl, whisk together the flour, sugar, baking powder, baking soda, and salt.

Use a 2-cup liquid measuring cup to measure out 1 cup of buttermilk and 1/4 cup of another milk. I used almond milk since that’s what we have, but you can also use cow’s milk or more buttermilk as well. Then whisk in 2 tablespoons of melted butter.

Pour the milk mixture into the flour mixture to form your dough. Mix until just combined, then flour your hands and knead for about 30 seconds. I found I had to add some flour to the dough because it was too sticky to even work with. Preheat the oven to 425F. You can do this at the start, but I found my oven was ready long before I was. I don’t like to waste electricity. Lightly flour a clean working surface and turn out the dough.

Use your hands or a rolling pin to flatten the dough into a rectangle about 12″x10″.

Spread about 2 tablespoons of softened butter across the dough, then sprinkle the cinnamon-sugar mixture to the edges. You can use a slanted knife to help spread the mixture as needed.

Starting with the long end, carefully roll the dough into a log. Pinch the seam to seal. Cut off the ends so there isn’t any excess.

Put the first cinnamon roll in the middle of the prepared pan, and spread the rest around the outside. Use the remaining 2 tbsp of melted butter to brush the tops of the cinnamon rolls.

Bake the cinnamon rolls at 425F for about 15 minutes, then lower the heat to 350F and bake for about another 10 minutes, just until the edges start to get brown.

Meanwhile, prepare your cream cheese frosting by combining the cream cheese and butter. Then add in the powdered sugar, a little at a time, until it is creamy and smooth. Beat in the vanilla extract. Set aside until the rolls are done baking.

Let the cinnamon rolls cool for about 5-10 minutes before spreading the frosting. Serve warm and enjoy! 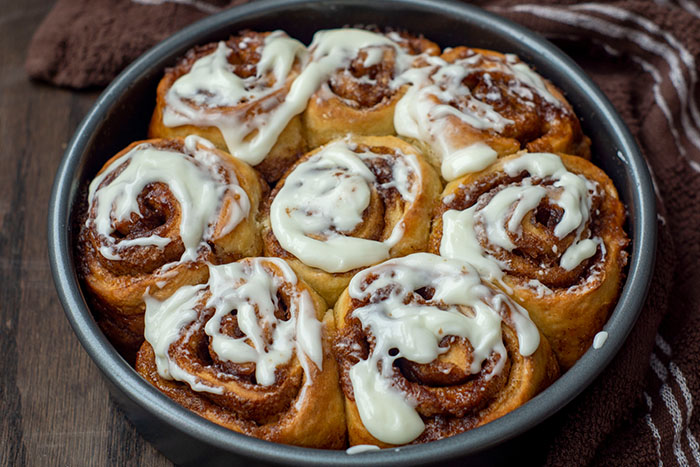