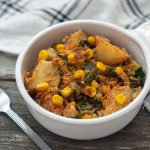 Try this vegetable pastitsio, a meatless version of Pastitsio, a classic Greek casserole with layers of noodles, vegetables, and endless flavor.

A few weeks ago I was given a bunch of old cookbooks. One of the other moms in my Mothers of Preschoolers group was cleaning out her kitchen. The one that really stuck out to me is 9×13 The Pan That Can. It’s a cookbook full of over 300 recipes that can be cooked in a 9×13 pan. The first recipe I tried from the book is Vegetable Pastitsio.

The book describes it as a meatless version of a classic Greek casserole. There are a lot of vegetables in the dish, and we have been trying to eat more veggies lately. It also uses some mint leaves in it, which we have plenty of from the garden, so we gave it a shot.

It was different than other meals we’ve made, but we liked it! The only thing I didn’t like was that it made multiple dirty dishes. I usually try to use only one or two in my recipes, but it was still worth it.

You can use any small noodles for this dish. I’ve made it both with macaroni elbow noodles and ziti noodles. I asked Justin which he prefers and got the ever-so-helpful answer of “I don’t know.” I had leftover elbow noodles from macaroni casserole the first time. The last time I made this we had leftover noodles from baked ziti. I like to use up what we have in the pantry when I can, so we use the noodles on hand.

Start by getting your 9×13 baking dish out and ready. Lightly grease the pan and preheat the oven to 350F. Start cooking the potatoes because those take the longest. I like to cut mine into bite-sized pieces and boil until they are tender.

Cook the noodles according to the package and drain, rinsing them with cold water. In a large bowl, combine the cooked noodles, eggs, and 1/4 teaspoon of the salt.

Layer this mixture in the bottom of the 9×13 pan.

Arrange the fresh spinach on top of the noodles, spreading it out as much as possible.

In a large skillet, over medium heat, melt 1 tbsp of butter then add the onion and garlic and cook for about 3 minutes.

Then add the tomato sauce, corn, potatoes, mint, oregano, 1/4 tsp of salt, cinnamon, and pepper, stirring until it is all heated through.

Spread the potato mixture on top of the spinach and spread it out as much as possible. It’s ok if it doesn’t completely cover the spinach, just do the best you can.

In a medium saucepan (I used the one from the noodles so I didn’t dirty another pot), melt the remaining two tablespoons of butter over medium heat. Stir in the flour and nutmeg, then add the milk. Cook until it’s thickened and bubbly, stirring frequently.

Pour this flour mixture over the potato mixture. Bake the entire meal, uncovered, for about 30 minutes or until heated through.

Let it cool for about 5 minutes before serving. 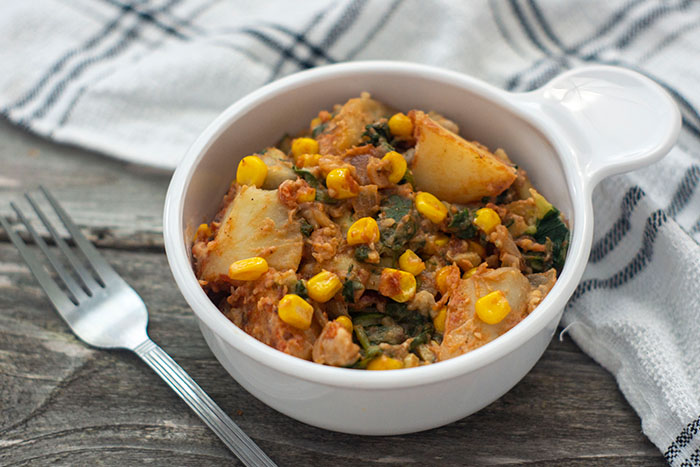