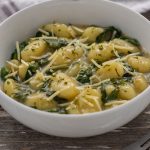 Though gnocchi is made from potatoes, they are as versatile as pasta. Gnocchi toasted with a bit of spinach and lemon makes a quick appetizer or meal.

In the last year, I’ve been experimenting with more recipes that use gnocchi. That’s how I came up with this recipe for Toasted Gnocchi with Spinach. The gnocchi is always my favorite part of Chicken & Gnocchi Soup, but I didn’t realize there would be many ways to use it. I love gnocchi, with its pillowy-soft texture and perfect bite-sized pieces. And of course, I will eat almost anything with potatoes, so gnocchi is right up my alley.

Now that I’ve been looking, there are multiple options for gnocchi. Cook the gnocchi with butter and sage. Put it in a red sauce similar to spaghetti. Cook it in soups. Toast it with spinach.

There are a few ways to make gnocchi. Typically from potato or wheat flour with egg, breadcrumbs, cornmeal, or other similar ingredients. You can get them either plain or flavored with seasonings. Gnocchi is Italian in origin and dates back to the Roman era. The singular form of the word is gnoccho. But since there is usually a group of them, that word is hardly ever used. Gnocchi is believed to be the predecessor of pasta.

Originally, gnocchi was made with soft wheat flour. But that didn’t give a uniform texture. It was discovered that potatoes gave a better texture. Then most started to make their gnocchi with potatoes. The flour versions weren’t common anymore. Potato gnocchi started around the 16th-17th century after the Spanish brought potatoes to Italy from South America.

I am quickly learning that gnocchi is as versatile as any other type of pasta. Maybe even more.

When we made this recipe the first time, the lemon was a little overpowering for us. Since then I cut back on the lemon juice. Now it’s more of a garnish. It tasted much better that way. If you like a lot of lemon flavor, then go ahead and increase the amount to one tablespoon of lemon juice.

You can use this as a light meatless main dish, or as an appetizer or side for other meals.

Heat two tablespoons of butter in a large skillet over medium-high heat. Add the gnocchi. Stir occasionally until the gnocchi start to brown on the outside, about 8-10 minutes.

Add the minced garlic and thyme and stir for one minute. Then mix in the chicken broth, salt, and pepper, bringing it to a boil.

Cook everything until the liquid has reduced by half. This takes about 5-7 minutes. Then add the spinach, parsley, lemon zest, lemon juice, and the remaining two tablespoons of butter. Stir constantly to keep from scalding. Wilt the spinach and melt the butter.

Top with parmesan cheese and serve immediately because this will cool very quickly. 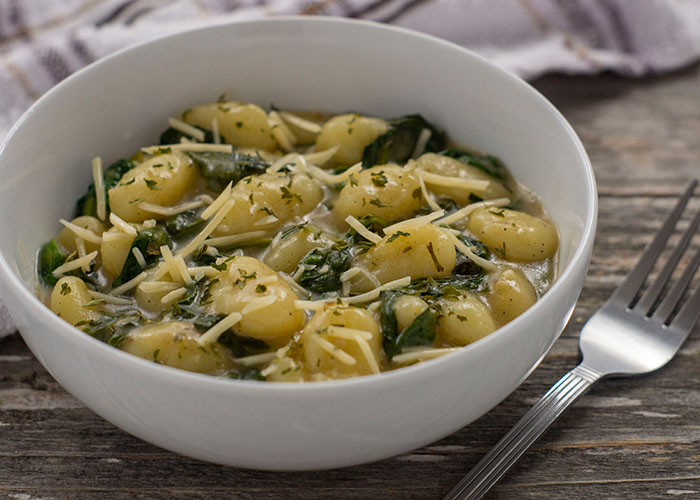 Though gnocchi is made from potatoes, they are as versatile as pasta. Gnocchi toasted with a bit of spinach and lemon makes a quick appetizer or meal.
Cook Time 30 minutes
Total Time 30 minutes
Course: Side Dish
Cuisine: American
Keyword: gnocchi, lemon, spinach
Servings: 2 cups
5 from 9 votes

44 thoughts on “Toasted Gnocchi with Spinach”