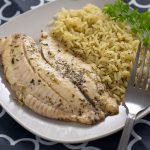 On busy nights, we need a quick and easy meal to get it on the table quickly and easily. Cilantro and Lime Fish is only 4 ingredients and 15 minutes!

A simple dinner really doesn’t get easier than Super Simple Cilantro and Lime Fish Dinner. It’s so easy, I couldn’t believe it. This was my husband’s idea for a meal on one of those nights we didn’t take anything out and had no clue what we wanted for dinner.

We have always had tilapia, and that’s what we made this meal with. But I want to start branching out to try new fish soon. I’m picky and don’t like a very fishy-tasting fish, but have been told to try cod next. No matter what fish you like, as long as it’s a light fish, this recipe should work.

This recipe actually came about because we had bought some Zatarain’s brand cilantro-seasoned rice and wanted to try that. Since it had cilantro, Justin figured some type of fish would go well. So we just started cooking. In the end, this ended up using only a few ingredients to make a delicious, simple, quick meal.

Seriously, it’s so simple I only have one step-by-step photo to show. I guess I shouldn’t call it step-by-step then since there’s basically only one step!

Thaw your fish just a little bit. Add it to a warm medium skillet over medium heat with a bit of oil to keep it from sticking. Squirt a bit of lime juice on the fish and sprinkle with cilantro on both sides.

Cook for a few minutes on each side until the fish is done. Serve with some rice and pico de gallo if you have it. 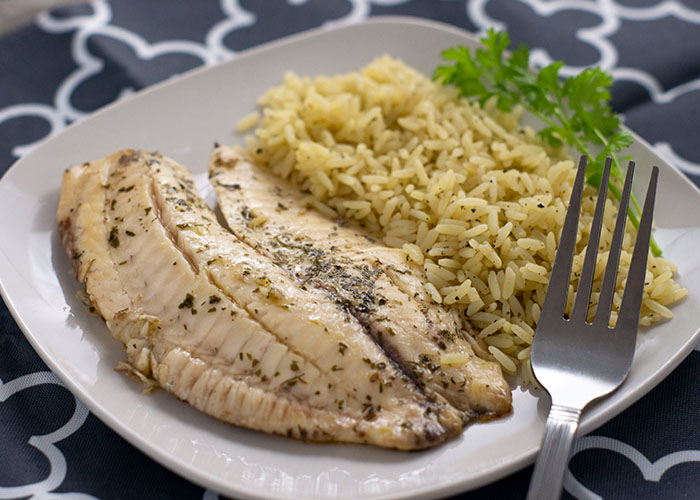