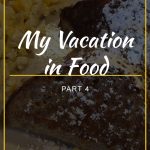 Our vacation in food part 4 had us looking for comfort foods from home, although we did still take advantage of the free hotel breakfast!

The tail end of our trip included mostly foods that we already knew and were comfortable with. By that time, we were about done trying new places and just looking for something from home.

Almost all of the towns we stayed in were small towns, so there weren’t any chain restaurants. It was nice in some ways because it forced us to try different places and new foods.

This was our last full day of vacation that wasn’t full of driving and flying. In the morning, Justin and I asked my parents to watch the boys so we could go out for breakfast. We asked the people running the hotel, and they suggested the Log Cabin Cafe in Silver Gate.

The food was all homemade and delicious! There was a placard at the table describing where a lot of their food comes from, which I thought was neat. The only thing we ate off of that list was the bread for my French Toast. But we didn’t go back for lunch or dinner to try anything else.

At lunchtime, we were in Yellowstone again walking on some of the trails so we didn’t eat there. We tried to walk the Pebble Creek trail but the creek was flooded from all the snow runoff so we didn’t get far. Then we walked up to Trout Lake. By the time we got back into the town it was almost 4 so we again had a late lunch/early dinner.

Every one of us enjoyed the pizza so much the night before that we went back to the Miner’s Saloon. This time we ordered smaller pizzas but got one cheese and one of the “redneck” pizza. When we first walked in, Ryan wouldn’t go past the entrance and said he didn’t want to eat there. When we asked why he told us it’s because they don’t have milk! So my dad walked across the street to the general store and bought some for him, then he was happy to stay!

That evening, after the boys went to bed, my mom and I went out driving trying to find some animals. While we were out, we stopped at a small place called Stop The Car and got some milkshakes. Yes, it was snowing, but it was so yummy!

Our last day of driving for the trip, woohoo! We had another 7-hour drive from Cooke City, Montana, down to Salt Lake City, Utah. In the morning, we had the free hotel breakfast again before packing up and heading out on the road.

To get there, we drove through Yellowstone again from the Northeast Entrance over to the West Entrance which gave us a view of some of the park we hadn’t seen yet. And we got stopped in traffic because everyone was taking photos of a bear! Mom and I really wanted to see a bear so we were so excited! It looked like a female black bear because I saw a cub run over the hill right as we pulled up. The last thing we saw was a moose, but by the time we stopped to get photos it turned to walk away so I only got photos of its backside.

When we got to Idaho Falls, we stopped at an Olive Garden. As I said, we were all ready for something we knew. I got soup, salad, and breadsticks as usual. Their alfredo dipping sauce for the breadsticks is a must for me. I had a small salad then two bowls of chicken & gnocchi soup! The boys both had a kid’s pizza meal.

For dinner, at the hotel, we weren’t very hungry, so we reheated the leftover pizza from the kid’s meals which was enough for all of us at that time.

Time for our last continental breakfast for a long time (I hope). It’s great having one meal free, but the options are so limited. Especially when we were at Super 8 hotels most of the time. The boys did have fun trying to eat an apple without it being cut up.

For lunch, we were at the Salt Lake City airport. I have to say, I was a bit disappointed with the food options at that airport. Most of the places were grab-and-go without much seating. We had 3 hours until our flight since we had to check out of the hotel at 11 so we wanted somewhere to sit down. With 6 people, two gate-check car seats, and a few suitcases, we needed some space. After trying one sit-down restaurant, only to learn it was mostly seafood which my mom is allergic to, we ended up at a food court with a McDonald’s for the kids, a Greek place for my dad, and a Mexican place for my mom and me (Justin got food a little later).

After finally getting home, we had almost no food in the house so we all had cereal for dinner before going to bed!

A few photos from the places we visited during these days: