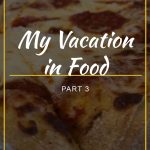 During our vacation, we quickly learned that pizza was a good choice for everyone. Read on for more of my vacation in food: part 3 when a lot of delicious pizza was eaten!

During our two week vacation to visit 7 of the National Parks, we had a lot of food out. Most of our breakfast was continental breakfast from the hotels. And many days we had a late lunch/early dinner, meaning only two big meals and a lot of snacking. It’s not always easy to try to keep within a tight budget while vacationing with six people. But I feel like we still did pretty well.

Once we left the cabin, we were down to only a mini-fridge and a microwave in our rooms. This meant the rest of our meals had to be eaten out. There isn’t much you can make (while still being somewhat healthy) with that little to work with.

Thursday was the first of two very long drives that we knew we would have on this trip. Since the hotel we stayed at in Green River was the only one without free breakfast, we went to the diner next door again for breakfast. The boys both got the kid’s pancake meal. I also got a meal with pancakes and strawberry sauce for the top. The strawberries were obviously not fresh, and I ended up scraping a majority of them off. I’ve gotten so accustomed to eating real food. The syrup that was obviously high fructose corn syrup full of added sugars was too much for me.

For lunch, we stopped at Chick-fil-a while we were on the road. As we were talking about stopping for lunch, Ryan piped up that he wanted “chick-a-lay”. There happened to be one at the next exit. I didn’t take photos since it was regular Chick-fil-a food and we just wanted to get back on the road.

We got to our hotel in Driggs, Idaho, which is not far from Grand Teton National Park and looked through the restaurant recommendations. My mom saw that one had a roof-top view. When we looked up the menu it was a pizza place, so we headed there. The restaurant is called Tatanka Tavern and it was the best food we had eaten yet on the trip! We were all in the mood for something easy and it hit the spot. We ordered an appetizer of rosemary flatbread with hummus and artichoke dip to share. And a large pizza with half cheese and half pepperoni. As we sat on the roof we could look over the mountains of the Grand Tetons. If we were staying here more than one night, we would have definitely been back!

Our hotel had continental breakfast, so we hit that in the morning before packing up and heading to Grand Teton National Park. It was slim pickings here, so I had a bowl of Frosted Flakes, toast, and a donut. Luckily, I don’t usually eat a huge breakfast so this was enough for me for a while.

We spent the morning in Grand Teton doing some of the trails and checking out the rivers and lakes. At lunchtime, we drove to Jenny Lodge to eat there. But the hostess told us their “chicken truck broke down” so they didn’t have any chicken at all. They gave us a menu to look over and we decided that there wasn’t enough on there we would all eat without the chicken meals. And the prices were more than we wanted to pay anyway. So we decided to keep driving and make our way toward Yellowstone National Park.

As we were nearing the exit, we saw a sign for a Leek’s Pizzeria near the lake in Grand Teton. Since we all agreed that the pizza the night before was delicious we went there for lunch. It was a great choice, and we were all full after that meal. My parents split a large pizza with the boys, Justin got a Caprese sandwich, and I got the Teton bread. Originally, I wanted to get a cheese calzone but was worried it was too big. The woman behind the counter suggested the bread since it was similar but not as big with a lower cost and had garlic on top. Sold!

After eating at the pizzeria, we drove through to Yellowstone National Park. We went to see Old Faithful as well as a couple of stops along the way there.

After seeing the geyser, we drove straight through to the Northeast exit to our hotel in Cooke City, Montana. When we arrived, we asked the best place to get dinner and they suggested the Beartooth Cafe which was within walking distance. Justin and my dad both got fish meals since they wanted to try the local fish in the area. Both of the boys got a hot dog meal which they devoured. My mom and I split a teriyaki chicken meal that came with mashed potatoes and fresh vegetables and it was amazing! This was also the first time I ever had a salad with sunflower seeds in it and I was not a huge fan of that.

By this morning, Justin and I were looking for something besides the typical foods of the hotel continental breakfasts. So we walked next door to Bearclaw Bakery and got some cinnamon rolls to go that we split with the boys. The wait to eat breakfast there was over 20 minutes so we just grabbed those from the baked goods rather than getting a full meal. Both of the boys also enjoyed the larger variety of cereal that was available at this hotel.

My dad was wanting a break that day, and both of the boys were complaining that their legs hurt so Justin stayed with them. My mom and I went together into Yellowstone to look for animals and we wanted to drive over to Mammoth Springs. We never had any lunch, but did stop at one of the convenience stores in the park and grabbed a bag of Doritos. We were obviously hungrier than we thought because we polished off the entire bag. I guess that was our lunch!

For dinner, we were looking online for ideas and I found the Miner’s Saloon which served wings and pizza and similar foods. We decided that every pizza place we went to has been the best food, so more pizza it is! They had a large variety of pizzas, so we got their biggest, which is a 20″ pizza, with half only cheese and the other half their “redneck pizza.” The slices were big, and Ryan refused to have his cut up. So I taught him how to fold a piece of pizza to eat it easier.

A few photos from the places we visited during these days: