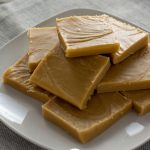 Treacle fudge is a common treat in the Wizarding World, whether you are at Hagrid’s or shopping at Honeydukes. Now you can make it too!

Before I set out on my journey to make delicious foods inspired by the Harry Potter books, I had never heard of treacle before. Upon further investigation (thanks internet) I found that it’s a type of light sweetener, similar to molasses, that’s popular in British sweets. Of course, this made finding some a bit more difficult. I had to order a bottle on Amazon (found here) to use for Treacle Fudge and the Treacle Tarts.

Treacle Fudge first appears when Hagrid gives it to Harry, Ron, and Hermione in The Chamber of Secrets. This is after Ron’s wand backfires and has him burping up slugs. It’s also sold at Honeydukes in the Wizarding World of Harry Potter in Orlando.

“He [Professor Lockhart] was the on’y man for the job,” said Hagrid, offering them a plate of treacle fudge, while Ron coughed squelchily into his basin.
…
“An’ then I told him [Lockhart] I’d never read one o’ his books an’ he decided ter go. Treacle fudge, Ron?” he added as Ron reappeared.

I’ve always enjoyed fudge, but I hadn’t made my own before trying this out. A few of the times that I went to Wizarding World in Orlando I bought fudge from Honeydukes, and it was delicious! They have so many different flavors there to choose from. It’s been years now, so I don’t remember which we bought. All I know is it was addicting!

I decided to try Treacle Fudge. The only edible “fudge” mentioned in the Harry Potter series is this one. I found a recipe here and worked with that the best I could.

I originally made my treacle fudge with regular molasses because I wasn’t able to find the golden syrup in stores here. We didn’t have time to order it online before I wanted to make the recipe. I have since made it with the golden syrup and it tastes even better. If you don’t have access to golden syrup, molasses will work in its place.

For the treacle fudge, you are going to want to use an 8×8 baking dish. The fudge won’t be baked. But that’s a good size for the amount of fudge this makes. Prepare your pan by greasing it.

In a saucepan, over medium heat, add all of the ingredients EXCEPT the vanilla extract. Stir constantly until the butter melts.

Once the fudge has melted, stop stirring and let it cook until the mixture reaches 240F on a candy thermometer. Mine says “soft ball” on it at this line. Then remove the pan from the heat and immediately stir in the vanilla extract.

Let the fudge sit, without heat, for about 5 minutes, until the bubbles start to subside. Now for the not-so-fun part:  take the candy thermometer out of the pan and stir constantly with a wooden spoon for about 15-20 minutes. The mixture will start to lose the glossy sheen and get very thick. This is when it’s best to have someone helping so you can take turns. My arms were getting worn out!

Pour the fudge into your baking dish and smooth it out on the top using the palm of your hand. Just be careful because it may still be a little warm.

After the fudge has completely cooled at room temperature, about an hour, carefully cut it into squares and serve! 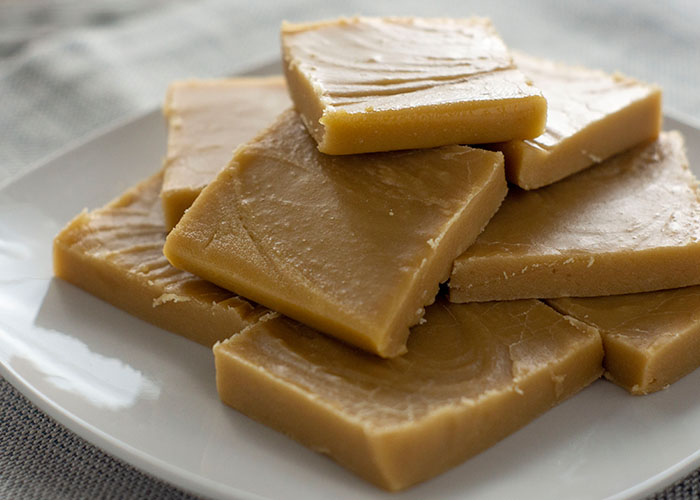 Treacle fudge is a common treat in the Wizarding World, whether you are at Hagrid’s or shopping at Honeydukes. Now you can make it too!
Prep Time 30 minutes
Cooling Time 1 hour
Total Time 30 minutes
Course:
Dessert
Cuisine:
American
|
British
Keyword:
fudge
|
golden syrup
|
Harry Potter
Servings: 20 pieces
5 from 9 votes