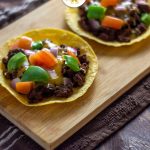 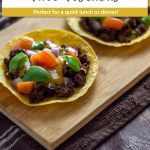 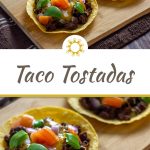 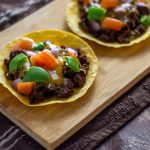 Use corn tortillas as a base for taco meat and toppings to make your own taco tostadas for a quick and easy dinner.

A few weeks ago, when I made Taco Pizza, there was a bit of confusion as to what we were having for dinner that night. I had the meal planned out in my head. As I started to make it, Justin was questioning what I was doing. So, we both made our own versions. I made Taco Pizza on a refrigerated pizza crust. Justin, meanwhile, made his on corn tortillas. In the end, his was more of taco tostadas (similar to these Bean and Cheese Tostadas).

We made different meals that night, but both were delicious! I can’t say which I prefer more because they both came out so different from the other. I think it would be a matter of preference as to which you should make for your family.

Both recipes started the same, with making taco meat and included regular taco toppings. From there, they varied in the order that everything was put on top as well as the base of the recipe.

Taco Tostadas can easily be made into a meal, and are perfect if you don’t all like the same thing on your tacos. Each person can build their own tostada so it’s exactly what they want to eat.

We almost always have the ingredients on hand to make bean and cheese tostadas since they are so quick, but now I am going to keep everything for these, too. Meals like this are exactly what I need on those crazy days after school when we don’t have a lot of time to get a meal on the table.

Preheat the oven to 400F. In a large skillet, brown the ground beef until it’s no longer pink.

Stir in the water and taco seasoning. Bring to a boil then reduce heat and simmer for 3-4 minutes, stirring often.

Lay the corn tortillas out on a baking sheet or baking stone. Top each with a scoop of the taco meat.

Sprinkle each with cheese. I like cheddar cheese but you could also use a Mexican blend or fiesta cheese.

Bake for about 5-10 minutes, until the cheese has melted. 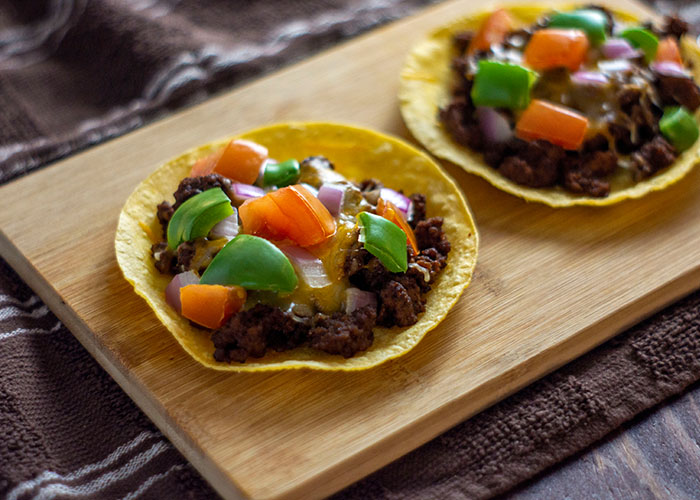